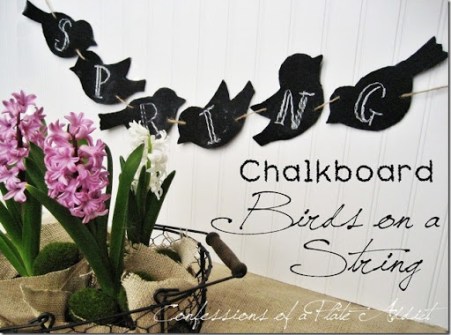 Its October! Only 31 days until Halloween! My girl has been asking about it for months. She loves dress up and, of course, there is nothing like trick-or-treating. We’ve picked up a few things from the dollar store to decorate with, but here are three fun signs you can download and print right from your computer: Eat, Drink and Be Scary, I Love Halloween, and Trick or Treat. 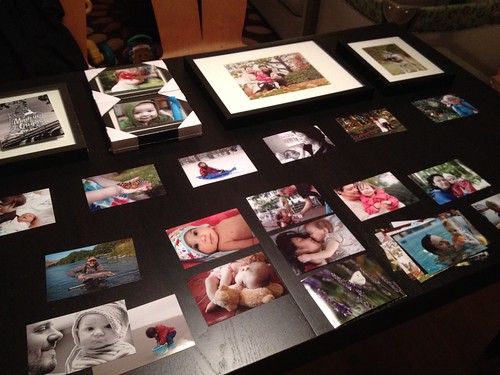 As I mentioned, the last time we went to Ikea we bought a bunch of Ribba frames. David finally agreed to let me put up a family photo wall, in the hallway, and I am in the process of laying out the frames to best fit the space. If I had my way completely, I’d be putting up a display wall in the greatroom, where these photos might actually be seen. However, the hallway is as far as the husband is willing to concede. (Wives out there, if your husband is the kind that gives you free rein with the decor, count your blessings).

Now, about our hallway – it is short, dark and narrow. Did I mention dark? Yes, there are hall lights, but we don’t use them during the day, and at night only if we’re looking for something. I’d love to install a sky tube (mentioned here), but I have my work cut out for me if I want to wear the husband down enough for that.

Arranging the frames was trickier than I thought it would be. I knew I wanted a somewhat symmetrical grid, and the same amount of space between each frame, but the sizes that the Ribbas come in make that difficult. I now know Ribba frames are best for those who prefer a random or asymmetrical approach (this one is a nice example).

With all the frames on the floor, and a measuring tape handy, I began to shuffle them around, sort of like puzzle pieces. This was the first layout I was happy with, but it was too long for the wall space. 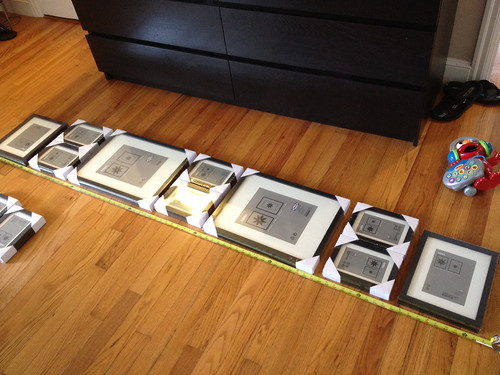 This is the best possibility so far, and what I’m probably going to use. It is much more linear than I initially wanted, but again, if I want a certain amount of symmetry (and equal space between frames) this is probably my best bet. It is also fewer frames, and therefore photos, than I had wanted to use. 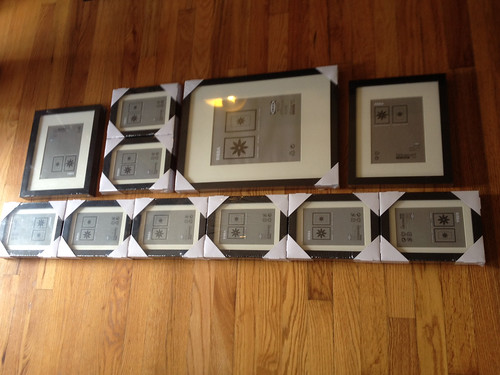 And now the hardest part – picking the photos. So many to choose from. Wish me luck!

This is another collage that wowed me today. Artist Jenny Odell compiled satellite images from Google and created a really unique set of images. The one above 125 Swimming Pools is my favorite followed by 77 Waste and Salt Ponds and 144 Empty Parking Lots below. Jenny writes “The view from a satellite is not a human one, nor is it one we were ever really meant to see. But it is precisely from this inhuman point of view that we are able to read our own humanity, in all of its tiny, reliably repetitive marks upon the face of the earth…” You can read more about what she has to say here.

I’ve been looking for wall art for the new part of the house, but nothing said “buy me!” until today, when my husband sent me a link to this Tree of Life poster. I LOVE it. Even better, we already have a black Ikea frame that fits exactly. Almost like it was meant to be. 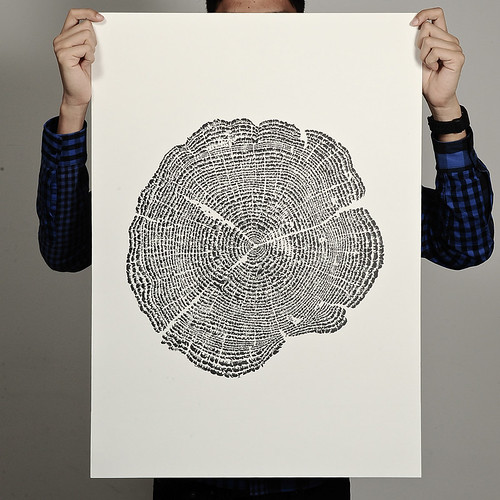 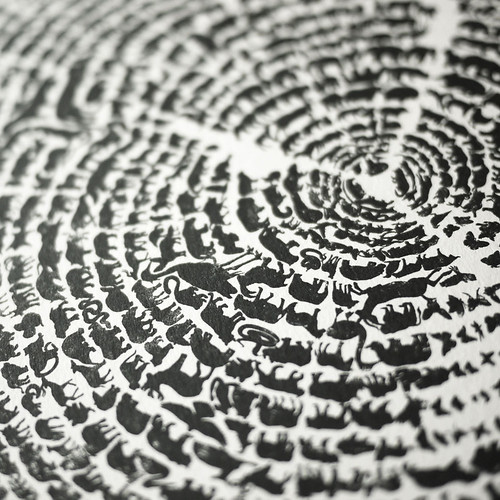 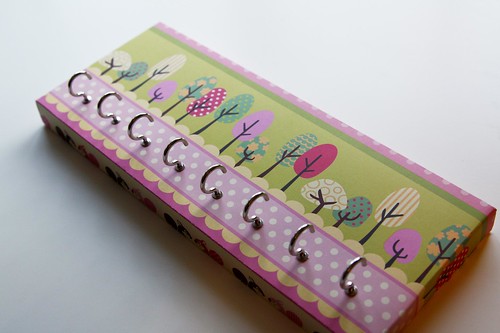 Over the years I’ve collected, or been given, various pieces of jewelry. I stopped wearing most of it when Chloe was born (except for my wedding ring), and now that she is a little older I’ve begun to phase in a few pieces every now and again. Often I forget what I own until I go digging around in the box. The earrings and bracelets are organized somewhat decently, but the lengths of necklaces and pendants are all jumbled together. It is not a pretty sight.

Months ago I chose some paper and hardware to make two necklace hangers, although the hooks would also work nicely for rings and bracelets, too. Here is the one I made last week. It is sized to fit a narrow space on the wall of my closet. That’s the nice thing about making something yourself – it can be whatever you want it to be, plus it would make a sweet gift. The wood came from Home Depot (recycled from another project), the paper from Craft Warehouse and the hardware from Target. 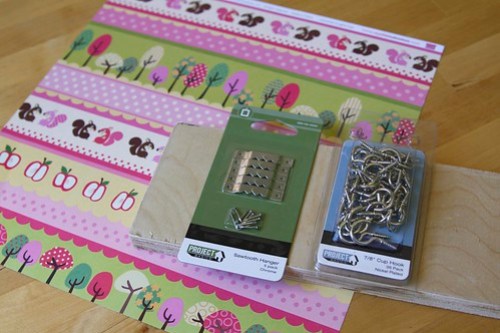 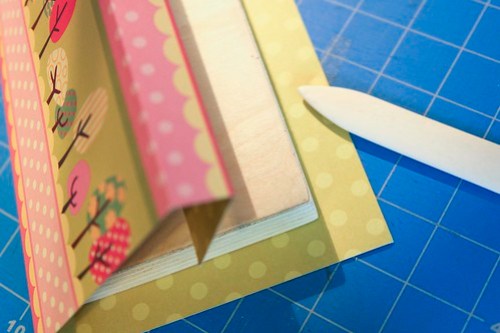 Step 1: Fold the paper around the board, basically like you’re gift-wrapping a present. For best results, run the tip of a bone folder along the edges to make the smoothest and straightest folds possible. 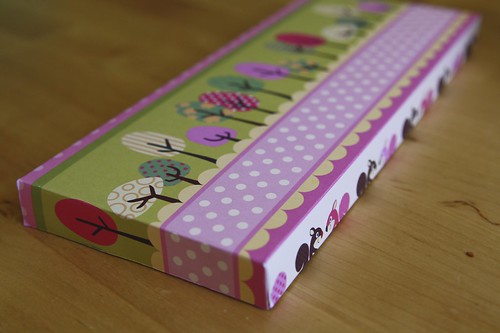 Step 2: Seal the sides down with adhesive. I used double stick tape. 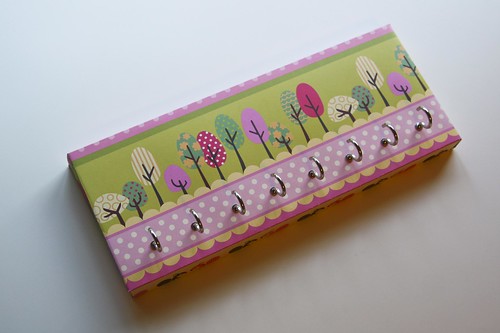 Step 3: Make a tiny mark where you want the cup hooks to go. Drill pilot holes at each mark so the cup hooks will go in smoothly, and then screw them in. Finish by lightly pounding in the sawtooth hangers on the back side, one at each of the upper corners. Enjoy! 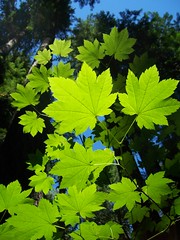 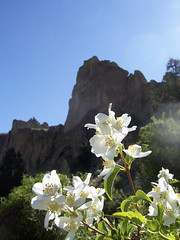 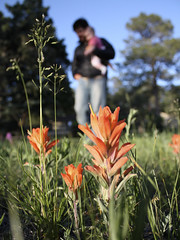 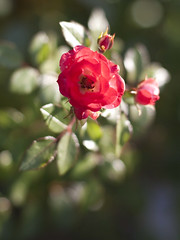 (1) Maple leaves in the forestÂ  (2) White flowers, Smith Rock
(3) Indian Paintbrush at the grandparent’sÂ  (4) Miniature Rose in our yard

I’m thinking about putting new photographs in the four gallery frames hanging in our living room. Over the years they’ve held illustrations, photos, artwork, magazine pages and right now they’re displaying fabric. However, you’d think with all the photos I take, I’d easily fill those four frames with new photographs. But, no. The issue? Finding four vertical shots to make a set. Since I don’t often photograph vertically, there is a limited number to choose from. Choosing a matched pair is easy. A set of three, fine. Finding four that look good together? That’s a challenge.

I briefly considered doing four shots of Chloe, but it seemed too shrine-like in our little house. Then I considered texture shots, but now I’m thinking about the four nature scenes above. I think what ties these together is the sunlight and glow of color, plus the combination of crisp foreground and softer background.Â  I also like that Chloe and David are represented in one of them, but not overly so.

Someday I’d like toÂ  shoot a set of nice black & whites – maybe architectural in theme – bridges, buildings, cityscapes. I like the set of three France photographs donated to Craft Hope’s Etsy shop (they sold!), but they are all horizontal, too. Or maybe I just need to scrap the current frame layout and turn them all sideways. Hmm… there’s a thought. 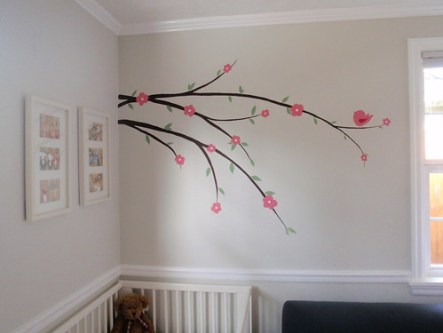 It seems I’ve never gotten around to sharing anything about Chloe’s nursery. Probably because it was rainy the day I took these photos and I think they look a tad gloomy. Anyway, like most parents on a budget we outfitted Chloe’s room mostly using white Ikea furniture. With the room barely measuring 10′ x 10′, and the closet taken up by David’s clothes (I take up the one in our bedroom), storage and organization were our biggest issues. 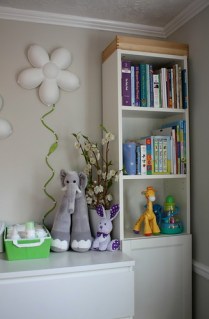 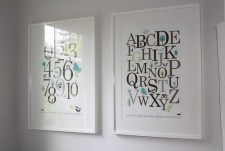 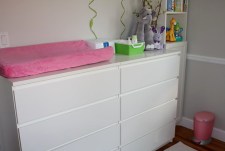 To increase storage we have two side-by-side 4-drawer Malm dressers , plus a Billy bookcase. One set holds clothes, shoes, and accessories, and the other set holds diapers, wipes, blankets, linens, toiletries, some future clothes and other items.

Chloe sleeps in a Gulliver crib. I like it because you can see the baby from all sides, plus it can convert to a toddler bed. For a while we were able to store boxes of future clothes underneath it, hidden by a beautiful bedskirt made by her Grandma Sandy. Then Chloe learned to stand, so we had to remove the bedskirt to lower the mattress, and now the bins sit out in the open next to the crib. Not so pretty, but not much choice. Grandma Sandy also painted the lovely flower and branch wall mural for us, following the design on this birth announcement. The ABC and 123 wall prints are by Sandra Isaksson. The only other piece of furniture is a navy fold down sofa that we already had. Originally we also had a rocking chair I bought through Craigslist, but David removed it to make room for the bins. Overall, it is a bit of a squeeze, and it continues to overflow despite our efforts to contain it all thanks to generous hand-me-downs that we won’t get to for a while. It is pretty functional, though, at least for now. 🙂

I am really loving the new look of wall decals. They add an artistic touch with such a minimal amount of work, and are often customizable in colors to match your existing decor. David and I have talked about getting one for the living room, but I’m almost sure I’ll get one for the nursery. Here are just a few of my faves: 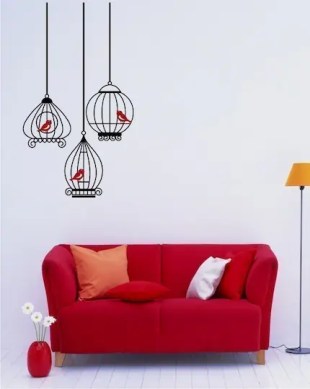 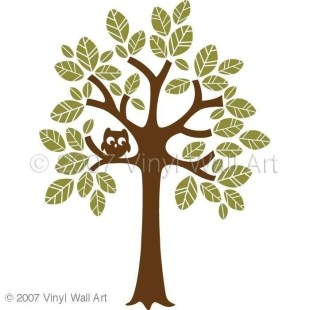 One or Two Color Tree (holly.etsy.com) 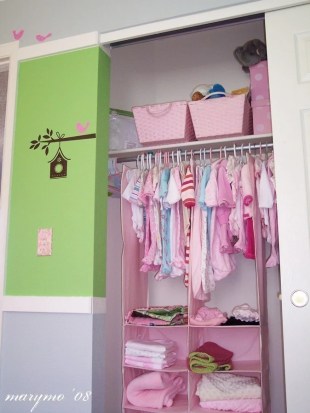 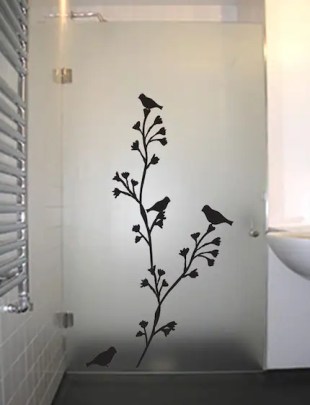