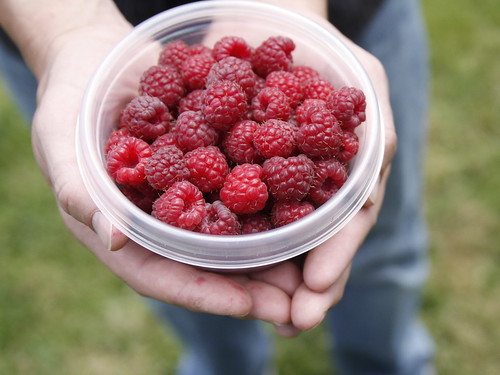 It’s that time of year again for these red beauties. The sad thing is that Chloe no longer likes them. Last year was so much fun – she’d pick and eat as many as her little hands could reach. This year she’ll help pick, but that is about it. At least she still likes blueberries. 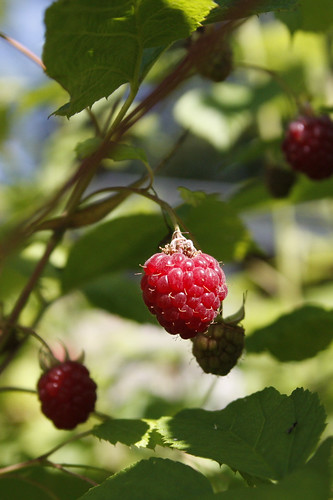 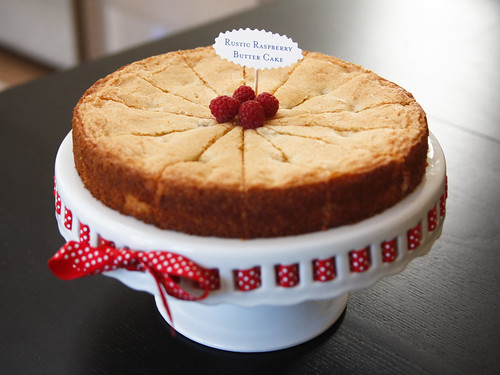 For a Fourth of July bbq at a neighbor’s house I made what I call a rustic raspberry butter cake. Simple, buttery goodness, and a great way to use up any in season fruit (I’ve used rhubarb and strawberries, too).

In a mixer, cream together butter and sugar until fluffy – about 3-5 minutes. Beat the eggs together lightly and add in slowly. Mix the flour and baking powder in a separate bowl and then add it in as well. Pour mixture into a lightly-oiled baking pan and dot with fruit. Finish with a dusting of sugar and just a light sprinkling of sea salt on top. Bake at 350 degrees for 30-40 minutes or until golden. 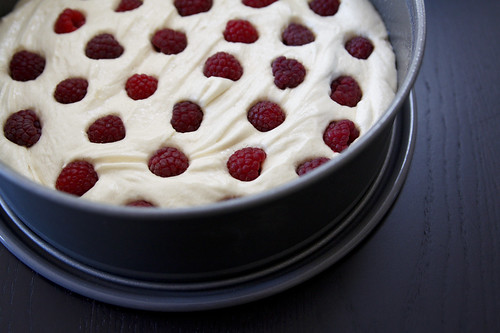 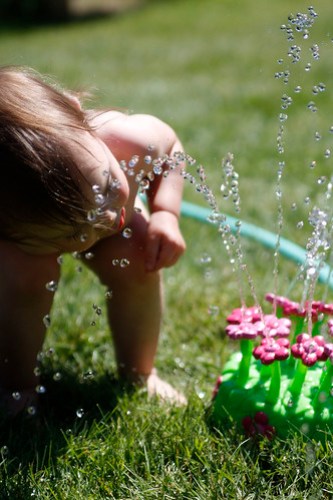 We’re suffering through a heat wave in Portland right now. So far we’ve gotten by with only fans, but tomorrow I’m guessing the AC will get its first run of the season. Chloe’s lovin’ it, though. Yesterday she got to play in the nearby park fountain for the second time, although she will still quite timid. All of the jets except four are quite forceful, and the four tiny jets were crowded with other babies, toddlers and parents. So, today we broke out our new Melissa & Doug Blossom Sprinkler. I bought two on a whim back in March, and gave the second as a birthday gift. It is everything that I’d hoped for. Right now we’re keeping the flow low, so Chloe can get used to it, but it also goes big, and the sprinkler heads are soft and flexible for little feet. I think we’re going to get a lot of use out of it this summer, and since losing our trees, I’m sure our grass is going to thank us. 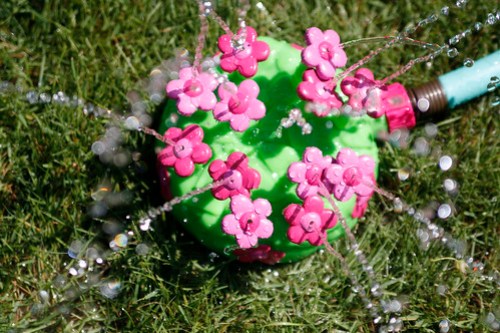 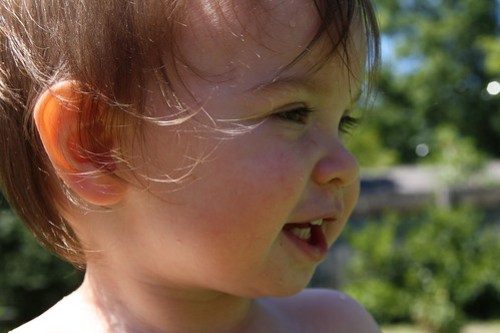 On another note, I recieved a lot of really insightful advice in the comments of my recent Maybe I should have spanked her post. I appreciated reading every one, and gleaned some good information.Â  It also spurred me to look at some “raising toddler” help books at the library. The one I’m currently reading is The Happiest Toddler on the Block by Harvey Karp, MD. I was really impressed with how well the techniques from his other book and DVD worked when Chloe was a newborn. I’ve gotten through the first four chapters so far, basically presenting the idea that parents should act as an “ambassador” to their children (vs. being a buddy, or a boss), and how to communicate respectfully using the “Fast Food rule” and “Toddler-ese.” To be honest, I was skeptical about the “Toddler-ese,” but I had an opportunity to try it during dinner tonight. Chloe must have hurt her mouth somehow and was crying. Daddy tried to distract her with redirection, which usually works, but she just continued crying. It was my opportunity to give toddler-ese a try. To my surprise, Chloe responded by pausing mid-wail, which was just long enough for Daddy to redirect her again with the promise of a cookie (it was the end of dinner, after all). Whoa! Was this just a coincidence? Hard to tell. I plan on trying it again in other situations, and if it works even half the time, then I’ll be happy.

So, I had every intention of writing about the rest of our trip, but I think now I’m just going to summarize the highlights in one long post. We had a good time, no question, and I do want to share, just not as individually detailed as I had planned. I haven’t been in a very bloggy mood lately, probably because Chloe is evolving faster than I can keep up. She’s amazing. But more on that later. Here’s some pics from the remainder of our trip. 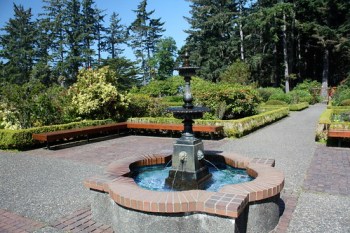 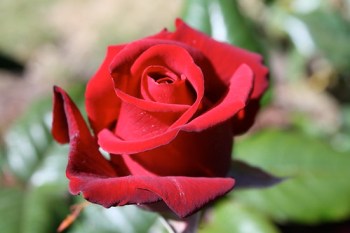 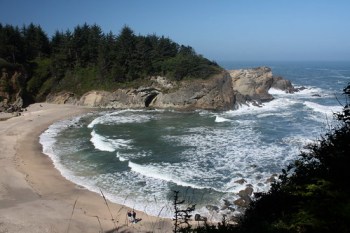 The hidden gem of Simpson Beach

This park is awesome. Imagine owning a private estate on the coast, with your own sandy beach, and building a gorgeous summer home on a bluff high above the waves. Then add a formal garden, including a Japanese-style garden surrounding a 100-foot lily pond, all in the early 1900s. Unfortunately (or fortunately for us), the great depression occured. Now the mansion is gone, but the gardens have been restored and there now sits an enclosed observation deck on the original home site. I would have loved to have spent more time here (just down the road from Sunset Bay State Park), but Chloe was getting tired and we wanted to let her sleep on the drive down to Bandon. Thus, we also missed Cape Arago State Park, just south. 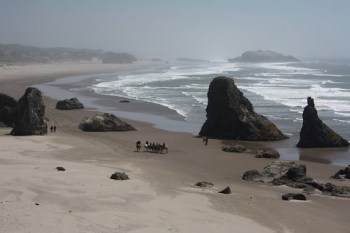 Part of the Bandon coastline, plus a view of riders probably from Bandon Beach Riding Stables 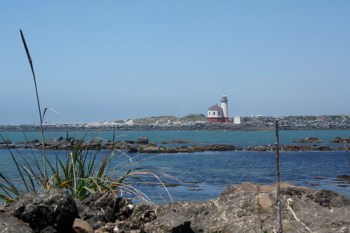 By noon of day 2 we were in Bandon, Oregon. We treated ourselves to a fresh and delicious! halibut fish-and-chips lunch at Bandon Fish Market, before perusing the little shops. Dessert was yummy chocolate and handmade candy samples at Cranberry Sweets. (Steer clear of Bandon’s Coffee Cafe, though, our latte was very disappointing.) 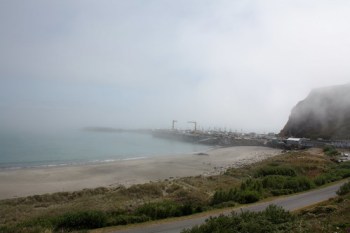 Misty boats at the Port of Port Orford, Circa 1856 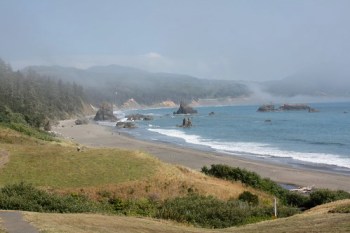