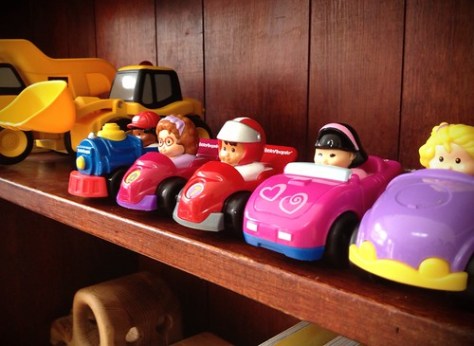 Abundance requires simplicity â€” because in order to have abundance in one area, you must reduce something else. You can either use your toy budget to buy a roomful of random toys or you can decide to focus on investing in only two or three open-ended toys: say, wooden blocks, a wooden dollhouse, LEGO.
â€” from Camp Creek Blog, Project Based Homeschooling

Yesterday, I read a post called Parenting with abundance and simplicity. The timing could not have been better. I had just spent hours organizing and sorting the kids toys that morning – a task always fraught with indecision, nostalgia and little hands trying to undo the progress I’m trying to make. I only have enough energy and motivation to do this every once in a while, so when I decide to do it, I make it count. Some things are perfectly clear, like how all the stuffed animals have a designated bin Chloe’s room, all the small junk toys (party favors, happy meal, or dollar store stuff) goes in a “travel” bin (since I don’t care if they get lost) and all play tools and most vehicles go in Leo’s room. This is not to say, for example, that Chloe doesn’t play with the trucks, it’s just that she almost never does, but she’s free to play with them whenever she wants.

One of the toys that has gotten the most cooperative play in our house from both kids is the play kitchen. You may have seen it in the background of other photographs because it is near the dining table and family room. The concept written in the Parenting with abundance and simplicity post clearly reflects what I’ve seen in the kids’ creative play: That because we have an “abundance” of play dishes and pots and foodstuffs, there is almost never a reason to fight over anything. They are content to play together. The kids have tea parties, pretend to make dinner, feed each other… it is a pleasure to watch. They get really involved and I can almost see their little brains at work while they concentrate on their self-directed tasks. It’s usually quite peaceful… until Leo decides it is more fun to throw plastic fruit across the room (or at each other). Or it’s time to clean up. Even then it’s fairly easy because its fine with me as long as everything generally makes it back into the cabinets.

The Abundance concept makes me realize something else… Chloe and Leo often fight over the blocks. We have four different types (duplo, classic wooden, mega blocs and a generic brand – not including Legos). I always thought it was cool that we had a variety, and rotate bringing them each down for play. But what if we had double of just one or two sets? Would the kids play longer and possibly collaboratively? Would Chloe complain because she is out of a certain color before she is finished implementing her idea? Would she stop trying to steal them away from her brother causing him to then knock down her structure in frustration? Also, now that I am thinking about it, Chloe usually says she’s ‘finished’ once she’s used up all the blocks. So what if there were a lot more blocks to use? Would she then spend twice as long and be twice as involved in her project as she currently is? For example, the photos in the previous post were taken when she was ‘all done’ – both times because she didn’t have anymore blocks left. Do you see my light bulb moment here?

This leads me to the other things they most often fight about. The biggest one, naturally, is the iPad. I’ve taken to putting Chloe’s Netflix shows on the regular TV (using the appleTV) and letting Leo have uninterrupted time with the iPad. Otherwise, it’s a pushing/pulling match with Chloe yelling and Leo pulling her hair. Another thing the kids have been fighting over lately is Leo’s new cozy coupe that his Aunt Katherine sent for his birthday. But there is no way we are fitting another one of those in the house, despite how much play it gets!

Anyway, this whole abundance thing really makes sense to me. Yes, kids should learn to share, but yes, providing an abundance of well-chosen open-ended toys also allows for meaningful benefits I hadn’t considered before. This is a parenting concept that sort of rocks my world. 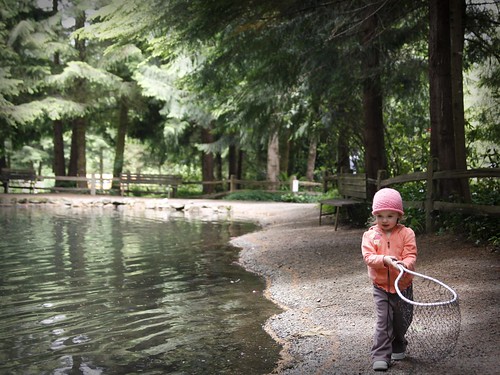 These photos were taken at Rainbow Trout Farm a few weeks ago where Chloe got her first “real” fishing experience. David insists that Chloe will be a champion fly-fisher one day, so he is starting her down the path to success. Leo was only 2 weeks old then. He mostly slept through the whole experience. 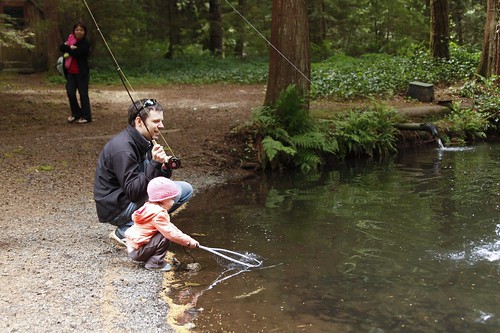 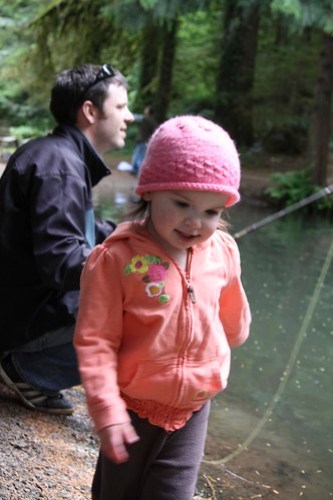 In the case of a toddler versus newborn scenario, it is almost certain to be the toddler who gets shafted. I feel like I’m always asking Chloe to “hold on” while I see to Leo’s needs first (feeding, diaper changing, whatever) before I can get Chloe what she wants (anything from setting her up with a project, getting her a snack or putting on a video). Very rarely do I let Leo really cry while I see to Chloe’s needs, although sometimes there has been no choice in the matter.

One of the reasons I am grateful for David’s paternity leave is the time he’s been able to devote to Chloe. Yes, I’ve needed a little help with the newborn, but at this point I have the skills to take care of him on my own. Knowing Chloe is getting attention from Daddy (and grandma while she was here) really helps assuage the guilt I feel for not spending more quality time with her. It also leaves me more free time to focus on Leo. This newborn period flies by, and I am trying to savor it the best I can, knowing it will be gone all too soon. 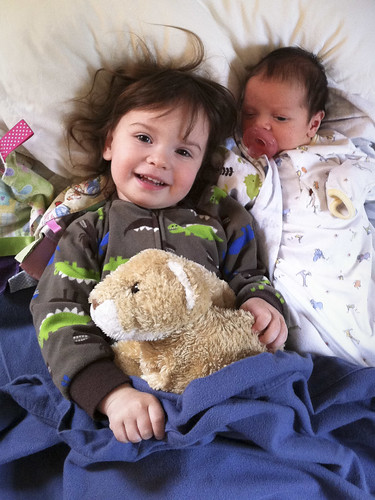 Leo turned one month old this week. Several times I sat down to try and write about what life has been like this past month, but I can’t seem to find the right words.

One thing for sure – being a mother of a newborn and a toddler is HARD. Existing on such minimal sleep is the worst part – like living life through a fog. Simple tasks can seem monumental. And I feel like I should be happier – like when my mom was here, I felt like I should have been so happy, but I wasn’t quite as happy as I thought I should be. Does that make sense?

Anyway, in a nutshell, this past month has been stressful, but things are getting better. I am feeling better, both mentally and physically. Best of all, we are slowly starting to adjust to our new shape as a family.

As for Leo, he is definitely growing. Seriously. It was like I woke up one morning and my tiny newborn was replaced by a hefty baby boy (which makes sense when I think about it, since all he wants to do is nurse). Nights are getting somewhat easier, and what seemed to be his constant fussing and crying is giving way to a few more periods of “quiet alertness.” Thank goodness.

The thing I miss most is the little time I had for myself, and going out with the “ease” of having just one child. Now there are two little individuals with vastly different needs. There are moments I feel trapped and frustrated in my own house, and other times when I don’t want to leave again, ever. Plus, I miss my husband. He’s here, too, doing his part, but our whole lives are revolving around the kids right now, with no time for us. It will be good when Grandma Sandy (my mother-in-law) comes next week. Hopefully that might give us time to reconnect. So, again, it’s hard. But we’re dealing. And learning. And living.

One day at a time.

(Btw – that photo was taken by David a week or so ago, so Leo is not a one-month old in that photo. Note to self: take more photos!) 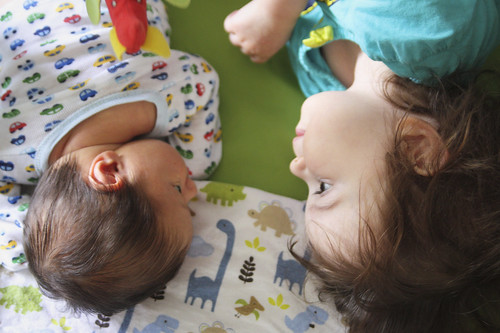