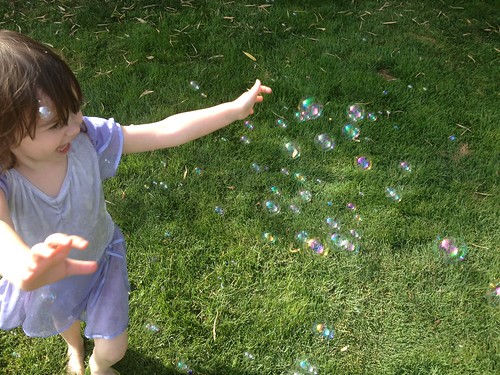 Chasing bubbles in the back yard

It is not even summer break, yet I already feel like I’m having a hard time keeping the kids busy. On one hand there’s the advice that says it is good for kids to be bored, because it forces them to be creative with the tools (or toys) they have access to. On the other hand, I’ve also read that boredom actually puts a lot of stress on a young brain, which science has shown to be unhealthy. All I know is when the kids are bored, they make this mama C.R.A.Z.Y.! 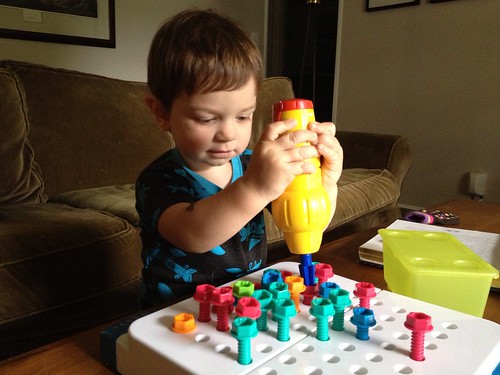 Since Leo’s second birthday is coming up in a couple weeks (and since my parents want me to buy Leo’s gifts for them), I have been happily researching some new games and activities I think he would like. I’ve given him one gift a bit early, the Design and Drill Tool Kit

by Educational Insights. He took to it like fish to water. Anything with pieces and moving parts is fascinating to him. It’s the smaller of the three sets, but I wanted to give it a try first. I’m poised to buy more bolts and an extra drill so his sister can join him. I love to have them working on a project together. The other sets come with pattern sheets that older kids can follow.

Speaking of patterns, Chloe is definitely aware of them in both shapes and colors. Here are a couple of her creations from just this past week. These were projects she designed completely on her own. All I got was a “Mom, come look what I made!” at the end. Plus, I’ve got to hand it to her, she takes Leo’s interference a lot better than I would if I was trying to concentrate on a creative project. I usually try to give them a little time to work it out (like with the colored plastic blocks), but if Leo cannot control himself from knocking down her buildings down over and over (like the wooden ones today), then I will remove him and give her some peace to work. 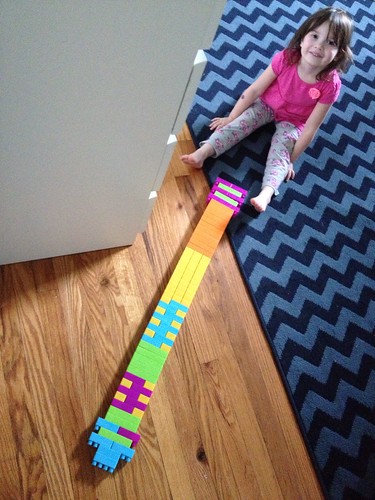 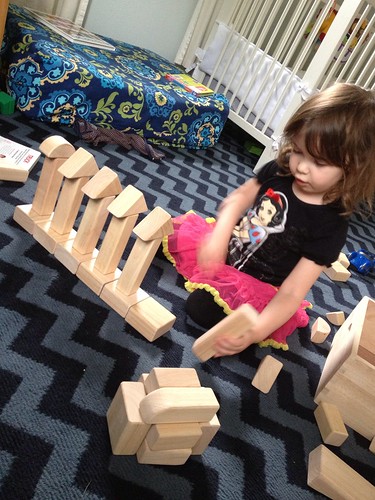 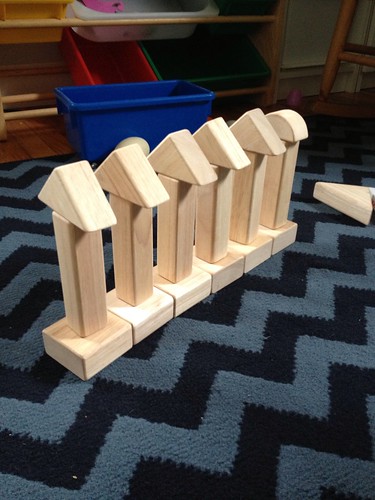 We also do a lot of arts-and-crafts type projects. Here was a project from yesterday, where the kids drew on popsicle sticks and I helped lash them together with tape (the classic “raft of popsicle sticks” project). It kept them both busy for a short time, and we did an “experiment” at the end to see if they would sink or float. However, Chloe was not happy to have the colors in her raft began to wash away. Whoops. I forgot that they were washable markers (the only kind I’ll let her brother near). By the way, Chloe told me that picture was of her and me that she drew on the sail. 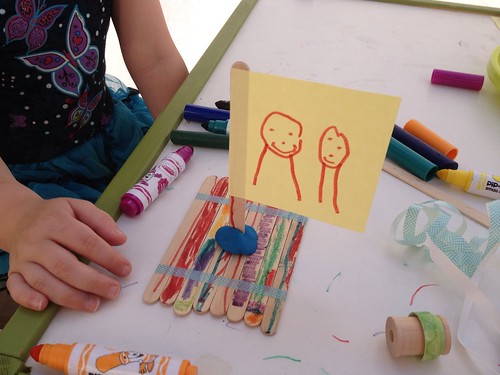 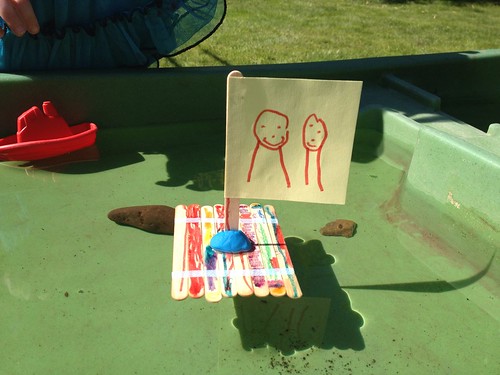 And sometimes, I just throw my hands up in the air while saying “Whatever!” and go pull out something I’ve been saving – like these animal masks that I ordered for Leo’s upcoming party. Part of me wants the kids to be surprised, but part of me also knows that it wouldn’t hurt for them to get played with a little before the big day. It was surprisingly fun! We made silly faces in the bathroom mirror, trying on the different animals and finally I had to run and get my phone so I could take a couple pictures. This is the face of a child happily engaged in the activity she is doing at the moment. A photo worth a thousand words to this mommy! 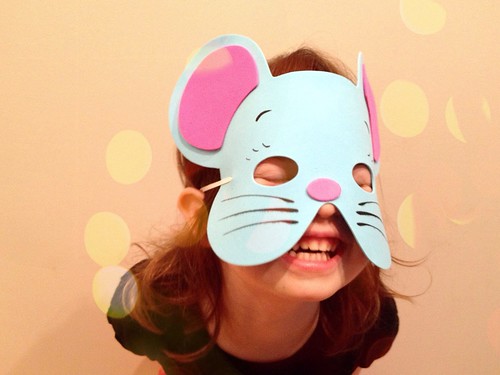 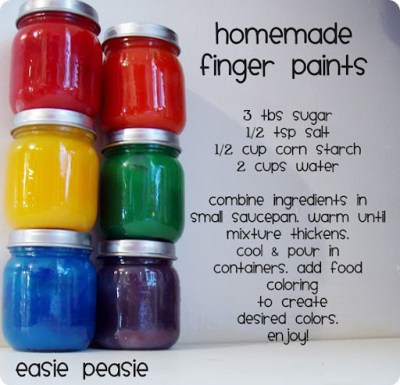 Shaving Cream Bathtub Paint from Having Fun at Home 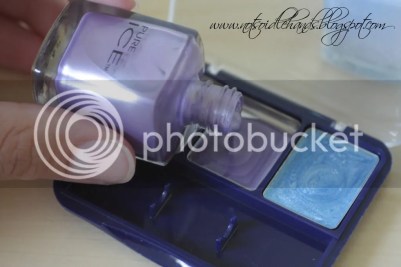 All finds thanks to the lovely eye-candy that is Pinterest. 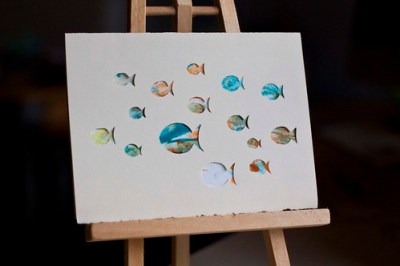 Chloe had her first finger-painting session last month, shortly before David’s birthday. I warmed up the kitchen, sat Chloe in her high-chair wearing only a diaper, and taped a sheet of paper down to her tray. A few globs of finger-paint in various colors were applied to the tray surface and directly onto the paper. She didn’t get it at first, and I was glad she had eaten recently or I would have been wiping a lot more paint from her mouth. By the end there was quite a mess, but several sheets of “drawings”. 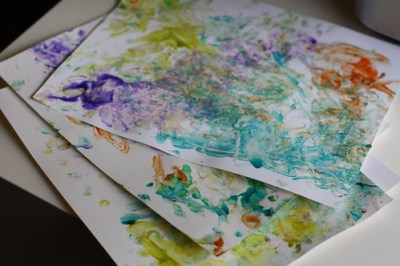 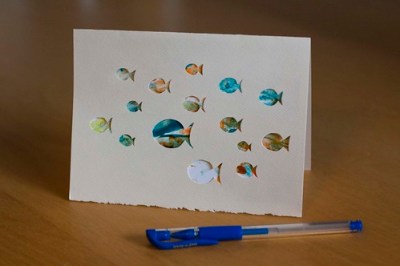 To help her make a card, I used an exacto blade to cut out a fish pattern (her dad’s favorite sport) on cardstock before placing a piece of Chloe’s artwork behind it. Voila! Instant birthday card from Daddy’s special little girl. We also made a similar piece of art for Chloe’s Grandpa Feldkamp for Christmas, but I forgot to take a picture of it. Instead of lots of little fish the cut-out consisted of two more-detailed trout silhouettes.

A while back I came across a really good post on displaying baby and child artwork, but now I can’t find it. However, a quick “What to do with kid art” search pulled these other interesting display ideas from Tiny Decor, CookieMag, Real Simple and Parents.

P.S. I used cardstock for the paintings because the non-toxic kids paint can soak through thin paper pretty easily, causing possible tearing if baby tries to pull at the edges. Despite the heavier paper, they still wrinkled while drying so I placed them under some heavy books after they were completely dry to flatten them back down.