With lots of holiday traveling coming up for many families, I thought I’d repost something I shared on a facebook group. I never really had to worry about this with my daughter (of course, there was only one child to watch back then), but my son will inexplicably decide to bolt away while we’re out shopping or running errands. This little piece of identification could make all the difference.

There was some discussion on here recently about name tags and ID bracelets and I thought I’d share this little tag. Despite the close-up pic, it is a small, featherweight cat tag on size 8 toddler shoes. There are many sizes and shapes. It cost $7.50 at Petsmart and I was able to make it in about 2 minutes. The front shows his name and the back holds up to four lines of text. This is what I included on the back:

These are velcro shoes, but if they were lace-up I’d probably put it on the front. It would also work well as a jacket zipper pull. From what I hear, all emergency personnel are trained to look at shoes and clothing for ID on a child. I don’t expect to ever lose my son, but just in case, this is a handy little piece of ID.

With four lines of text available on the back, there is plenty of room for health/allergy information as well as contact and identifying information. Plus it is a much cheaper alternative to the classic medical indication jewelry (and not as bothersome for little wrists or necks not used to wearing jewelry). 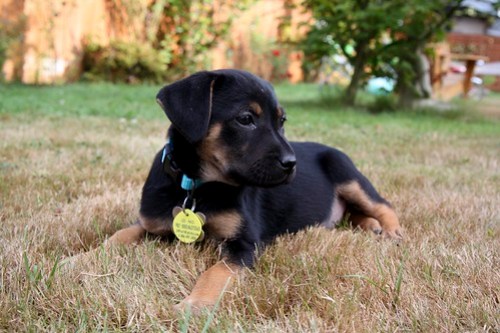 Our friends got a new puppy! We were honored to be invited for dinner on Stella’s first day home, and I got an opportunity to photograph the new addition. Just look at that little face. Isn’t she adorable? 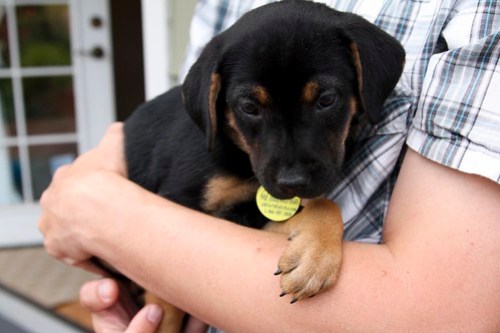 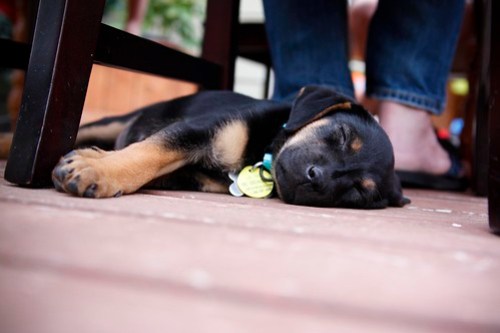 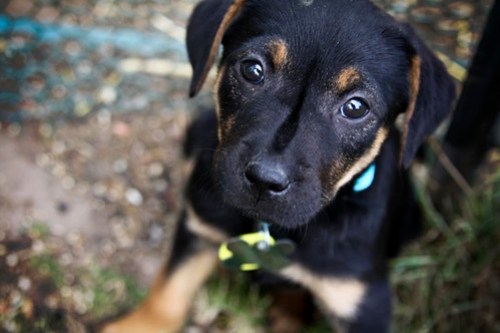 We had a really nice weekend – gardening and friends for dinner on Saturday and then fishing with Daddy on Sunday. We don’t go fishing with Daddy very often anymore. I might have said this before, but it is just too exhausting keeping a toddler safe on the riversides where David likes to fish. It is mostly exposed, so it is hot and we have to watch for sunburn, and the water is painfully cold, so you can only step in it for a handful of seconds. Chloe kept forgetting and I’d have to hold her back from just charging in. 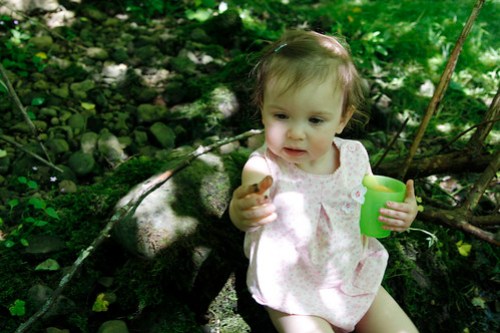 Toward the end of the afternoon we left the grassy area and found a nice shady spot amidst a lot of mud and rocks. Here is Chloe examining the mud on her fingers and saying “Dirty!” over and over. 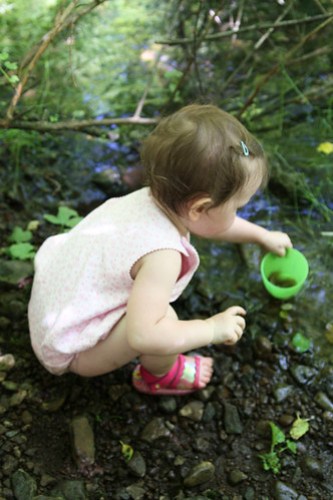 But, of course, she got over it quickly and just sat down to play. By the end she was dumping dirty water on her head over and over. She was a mess! 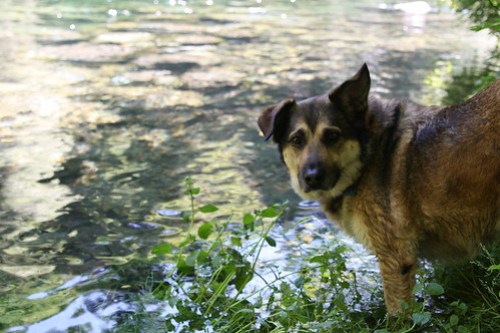 This was the only photo I took of Barkley. He LOVES coming to the river. We used to be able to throw a stick for him to swim and fetch, but he doesn’t do that anymore. I don’t know if it is his leg, or the temperature is too cold for him now that he’s older. We just found out that our next door neighbor’s dog was put down because of cancer. Makes me wonder how long we’ll have Barkley. I hope a long time, so that Chloe can grow up with a dog around. 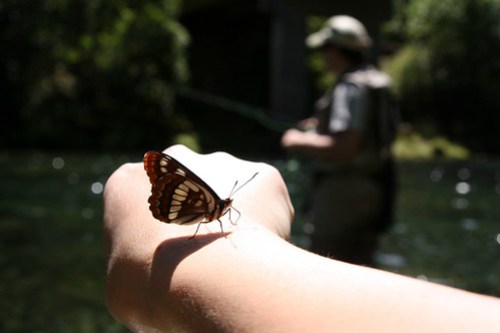 And lastly, here is a photo of a little visitor who landed on me. We saw several butterflies that day, and I remember thinking how neat it would be if I could get a shot of one. However, none of them were still long enough, they just fluttered by. This one however, decided to give me my opportunity. It wasn’t ideal, since focusing an SLR one-handed is a challenge, plus I had to keep stopping to pull Chloe back out of the water. I couldn’t believe how long that butterfly stayed, too. You can see in the photo that it’s proboscis is fully unfurled and it’s rooting around for some nectar. You’d think it might be attracted to my sunscreen, except Chloe was wearing the same kind. Plus, it was the only one that stopped to say hello. I feel quite blessed by that experience. 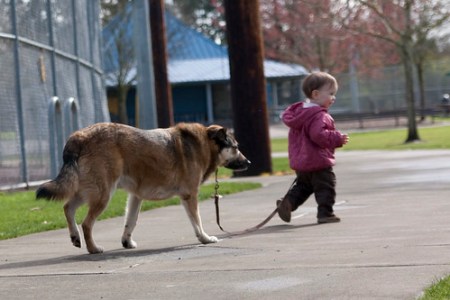 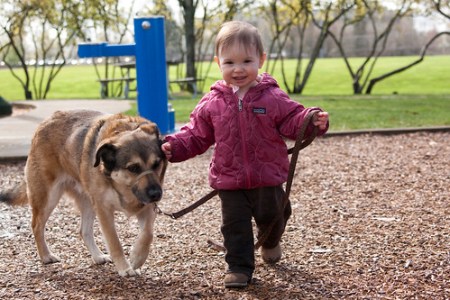 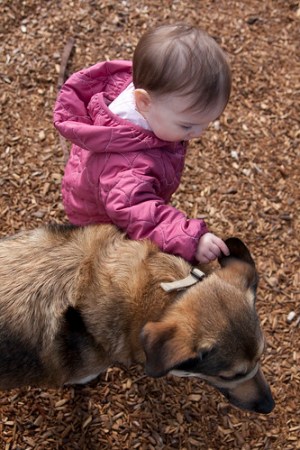 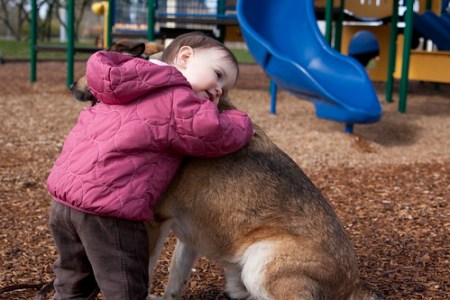 Chloe has shown particular interest in walking Barkley. I don’t think he’s very enthusiastic about it, but he seems to tolerate it surprisingly well, all things considering. 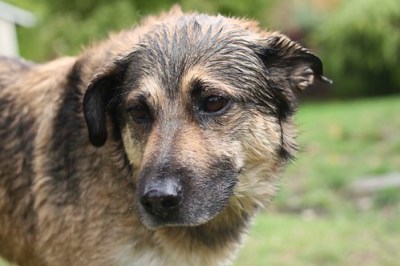 Poor Barkley. He’s had a hard year. Not only did he have to adjust to a new baby in the house, but he also had leg surgery which put him out of commision for months. I’m afraid that nothing will be quite the same for him again. This past Sunday we make it Barkley Day to give him a little extra love including a special walk, gentle game of fetch, and a trip to PetSmart. He would have preferred we left it at that, but when we returned home he also got a good brushing and scrub down in the backyard (see below). Chloe was very amused. Barkley not so much. 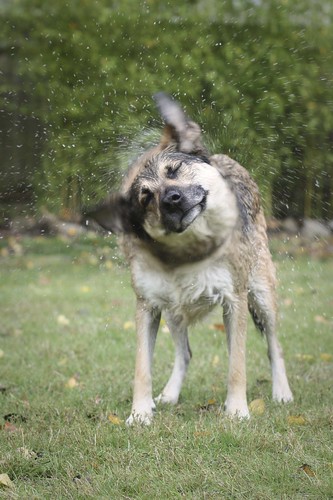 Found objects are so interesting. You can’t help but imagine how they got to where they are. What the circumstances were. Who they belonged to. Their prior lives. Kind of like I wonder about Barkley. Who loved him first? Who was with him when his baby teeth fell out? Was his one floppy ear broken by accident or was he just born like that? These things I’ll never know, but it stirs the imagination in several different directions. 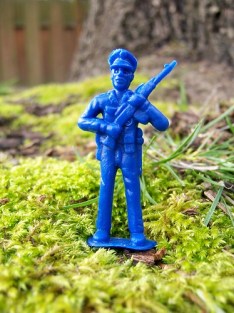 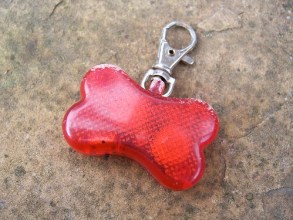 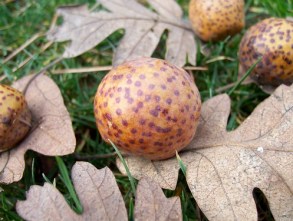 Another exciting event this weekend occurred while we were at Rood Bridge Park in Hillsboro today. The park is currently severely flooded by the adjoining Tualatin River. Paved trails abruptly end and are completely uncrossable. You can see the halves of trees sticking up out of the deep, milky opaque water. At one point after a trail stopped, David, Barkley and I walked out onto a huge fallen tree over the river to take a better look. In this situation, Barkley was pulling on the leash too hard for my balance and comfort so I bent down to unleash him. When I gave the release command, and pointed back down the tree toward David, he must have misunderstood me. Instead, he immediately leapt off the tree and into the moving water, shocking us both, only to find that his passage back to land was blocked by large tree branches and crisscrossing vegetation. The tree was too high above the water-line for him to get back on and he was desperately trying to find purchase somewhere, but couldn’t get a grip on anything, clawing wildly at the bottom bark of the trunk. Luckily he was wearing a body harness. David rushed over, knelt down and eventually was able to drag him out. David is my hero. It was over pretty quickly, but I know we were all a little shaken by the experience. The thing is, Barkley always enters water gingerly and with caution. I’ve never known him to just jump in like that. Was he just so trusting of me to blindly follow what he thought was a command into the water? I just don’t know what he was thinking or why he did that. I guess I’ll never know. I just hope that all doesn’t happen again. 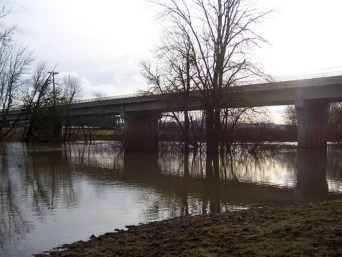 Hard to believe but there is a parking lot under all that water. 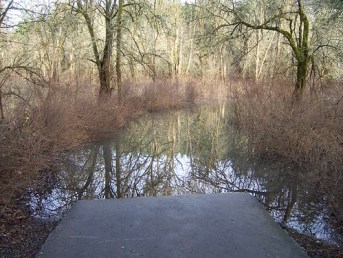 One of the paved trails flooded by the Tualatin River. 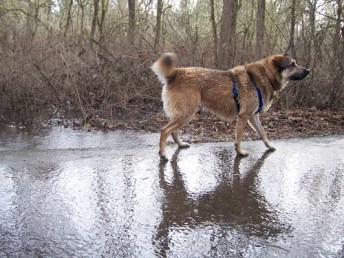 Barkley safe and unharmed after the incident. 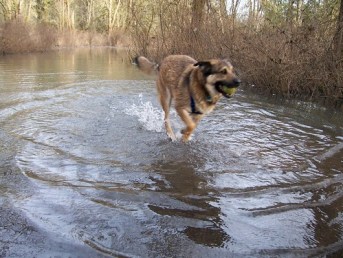 Getting his confidence back. He decided he prefers running on top of the water.

Just to be sure this experience wouldn’t frighten Barkley out of the water forever, David rolled the ball into a much safer and shallower area, barely inches of water. It took him a few moments, but after very cautiously peering in and taking it one step at a time, he quickly got over his initial reservation and retrieved the ball. Whew!