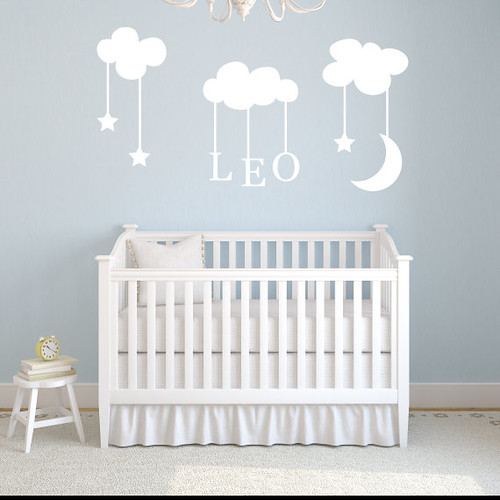 I’ve been wanting to spruce up Leo’s nursery for a while now. Currently his room consists of his sister’s hand-me-down white Ikea furniture (2 malm dressers, a billy bookcase, and a crib), a rocking chair, and two Isak prints, which I still love (you can see them in Chloe’s old nursery from a few years ago). The only things I’ve bought specifically for him were a grey minky changing pad cover, a colored bin set we found at a yard sale, and a set of shelves that we just installed.

It looks nice enough, but now that he’s a year and a half, his room is transitioning from a baby’s room to a toddler room – a comfortable and safe play area and toy storage are necessities. There is also the concern that Leo’s room is the coldest in the house, while Chloe’s gets the hottest. When we turn the heat up for Leo, Chloe’s room turns into an oven. Also, Leo’s room cools off quickly, especially at night. Room heaters seem to be either too hot or too loud, or a safety hazard.

Eventually we’ll put in replacement windows, which should cut the draft, but until then, David suggested an area rug as a layer of insulation. As long as it wasn’t white or light colored (which would just get dirty from the kids and dog) I could pretty much choose. I scoured the internet, including Ikea and Target, but nothing in the right size or for under $100. Finally, I saw a decent one on Craigslist, but it had sold. She told me it was purchased from rugsusa. I saw it on sale for the same price, including shipping, so I decided to go for it. I really hope it looks good.

The other thing I’ve been considering is a wall decal. I had one of David’s canvas paintings hanging above the changing pad, but Leo thinks its great fun to knock it down. A decal would solve this problem. I particularly love this one from LittleMooseDecals. I imagined it including Leo’s name and a slight tweak of the moon and asked if a customization was possible. Then Michelle sent me the image above as a sample. Awesome! Have I mentioned Leo’s walls are the same pale blue? And that I like clouds?

So, the question is, will these things go together, do you think? One thing I’ve learned about myself is that being a graphic designer doesn’t always translate well to home decor for me. However, I notice I gravitate to the same kind of nursery images on Pinterest, so maybe I should just go with my gut on this?