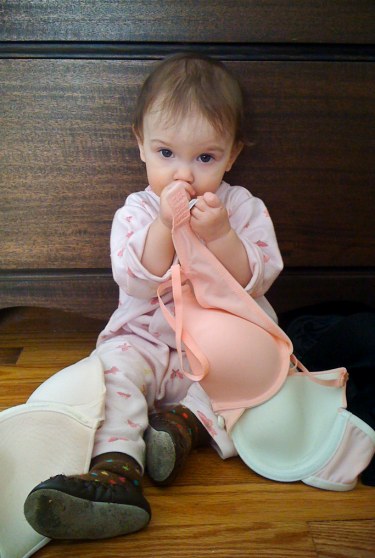 David captured this moment while I was out one morning. I mentioned the bra thing here.

Chloe and I have been sick this past week, although our symptoms were different. I’ve had body aches and a sore throat while she’s had a perpetually runny nose and slightly swollen eyes. We’re both much better now, although not yet back to normal.

Lately, I’ve been thinking a lot about the winding down to Chloe’s nursing. She is fourteen-and-a-half months old. Over the past two months we’ve casually dropped a feeding here and there, and it has been practically effortless, but now I feel at a bit of a standstill.

Like many mothers, I have mixed feelings about the weaning process. On one hand, it will be nice to be finished. I’ve never been one of those mothers who gush about how they just love breastfeeding, how they feel so bonded to their child through that shared activity. Yes, I’m very glad I was able to breastfeed Chloe. It was rough at first, but we got used to it and it became a normal and healthy part of our routine. Chloe is very healthy, and before this week she’s never been sick. I do worry about her being underweight, though. I try to get her to eat when I can, and have continued to breastfeed her, knowing that every calorie counts. However, she is a normal, active toddler who knows what she likes and wants to feed herself. She also liberally uses the words “no” and “all done”, especially during mealtimes.

Anyway, it is just hard to know if I am doing the right thing. Will I regret not breastfeeding her longer? Probably not, since my original goal was at least 6 months, and then, one year. Is the media, society, my family or my husband pressuring me to stop? No. As a matter of fact, my husband suggests I wait awhile, especially because a big change in our daily routine is about to occur. But otherwise, I am truly free to make this decision on my own. Will Chloe be upset or put up resistance? This is unknown.

On reflection, I think the issue most affecting my decision is my own pre-breastfeeding and motherhood opinion. Before I became a mother, or really understood anything about breastfeeding, when I heard of someone breastfeeding for longer than a year or two I would think that was kind of odd. And when I heard of someone breastfeeding a three-year old or older? I would think that was downright weird (not that I would have said anything about it, ever). But what did I know then? Nothing. I wasn’t a breastfed baby and neither was my sister. Now, I would never pass judgement (although I am still strangely fascinated by this story).

In the back of my mind, I think this leads me to think that others will judge me, too. But why should I care? It is not like anyone will know by just looking at Chloe and I. This is an individual choice. I know that. It is just that these days, there aren’t any “norms” to follow, which is good, but a little confusing. So, I shall either decide to wait, or not, and continue to be thankful that my little girl is growing up so healthy and beautiful.

Rachel‘s comment on this post reminded me that I’ve had this breast pad review sitting in my drafts folder for months. I don’t know why I never got around to posting it. Anyway, after breastfeeding for 6 months, my need for pads has certainly lessened, although I still use themÂ  regularly. Here are the ones I’ve tried, and my personal opinion and recommendations:

Medela Disposable Nursing Bra Pads ($9.99/60, 4.75″dia)
â™¥â™¥â™¥â™¥â™¥ (5 stars)
Overall: Discreet and comfortable
These are the pads I use most often. They are comfortable, but more importantly, they are thin and discreet. There are two pleats which helps contour the pad (place pleats below the nipple) and the design tapers to the edge. There is only a small square of adhesive toward the top, which is just enough to keep it from shifting.

Evenflo Comfort Select with Lanolin – ($7.99/60, 4.75″dia)
â™¥â™¥â™¥â™¥ (4 stars)
Overall: Soft and comfortable
These are one of my favorites. They are large but thin, and packaged in pairs. The inside lining (which is inexplicably purple) is soft against skin, wicks moisture away and contains a layer of lanolin. Their large size helps keep shifting to a minimum. They are nicely absorbent and after being used you can feel it’s gel-like core. These pads are less likely to be seen under clothes, although they do show occasionally since I favor thin bras and tees.

Gerber Ultra-Thin ($5.99/60, 4″dia)
â™¥â™¥â™¥â™¥ (4 stars)
Overall: A perfectly basic and affordable pad.
I love how simple and basic these thin pads are, with a breathable moisture barrier and nicely defined edges. For a while, I would alternate between this brand and the Evenflo brand, above. No frills, but economical, slip resistant, and comfortable (although probably not the best for heavy leakers). They are not individually packaged, which I liked because there was no wasted packaging and I could access them quickly straight out of the box.

Playtex ($7.99/60, 5×4″oval)
â™¥â™¥â™¥ (3 stars)
Overall: Probably better for heavy leakers.
These pads are contoured with a thread of elastic gather on the top and bottom. They are bulkier than the ones above, but provide a decent fit under clothing, despite a bit of lumpiness. They come individually packaged in a soft, quite wrapper which is nice when I need to change them in the middle of the night and don’t want to wake my husband and baby. The large adhesive section on the back bugs me, though, because the adhesive backing is attached to the packaging. This makes it easy to remove, but doesn’t give you the choice to leave the backing on if you don’t want to use the adhesive. They feel like they have an absorbent core which feels like gel after it has been used.

Philips AVENT Disposable ($4.99/40)
â™¥ (1 star)
Overall: These suck.
This was the first box of pads I bought, and they turned out to be the worst. At first I wondered if I had a bad experience because it was the time when my nipples were sorest, but no, I’ve read other reviews with my same complaints. First of all, they are thick, so they show through clothes. The perimeter of the pad was very itchy, and I found that the pad itself would often stick to my skin, leaving tiny fibers behind that I then had to wipe off so that I didn’t feed them to baby. At night, they shifted quite a lot, despite a tiny patch of adhesive, and I ended up leaking. The funny thing is, I thought this packaging looked trustworthy. Hah!

Dr. Brown’s Lace Washable ($10.95/4, 4.75″dia)
â™¥â™¥â™¥â™¥ (4 stars)
I like to wear these when they are clean, which only seems to be immediately after the laundry is done. They are 100% breathable, soft, absorbent cotton and are contoured for a comfortable fit. The outer side is lace, which provides slip resistance. They are puffy, but look okay under clothing, except in certain lighting situations where their round shape can be seen. Comes with a net washing bag.

Philips AVENT Washable ($5.49/6, 3.75″dia)
â™¥â™¥ (2 stars)
These are smaller than the Dr. Browns, and tend to shift more, especially at night. They look similar, although the cotton material that lies against the skin on these has become more pilled, despite less washings. The only real benefit I’ve had from this brand is that the smaller size fits in the front of my only padded nursing bra (I prefer nursing tanks, or thin material bras). I would not buy these again.Â  Also comes with a net washing bag.

Lillypadz – ($20/pair, 3″ dia.)
I got a pair of these re-usable nursing pads early on. They are an alternative to traditional pads, as they are made from non-absorbant silicone. One side of the pad is slightly tacking and adheres to the breast with what feels like a bit of suction, while also pressing against the nipple.
Pros: Lillypadz are thin, flexible and comfortable, washable and re-usable, and practically undetectable under clothing.
Cons: After a short while it seemed as if skin oils and some clothing fibers were collecting on the pad and not washing off. Silicone is not breathable (air circulation is necessary for maintaining skin and nipple health), and occasionally small pockets of air can collect around the nipple, which then can fill during let down. If on too long, the milk can force its way out and leak. One pair costs about $20.

The first time I heard about modern-day sharing of breastmilk was at a New Mom’s group I attended about a month after Chloe was born. I only went once, but I remember one of the mother’s sharing how she could not produce enough milk, and was getting milk donated from another mother who made more than enough for her own baby. At the time, I felt surprised. Would I share that kind of information if it was me? Would I choose donated milk (if it was available) over formula, if I couldn’t breastfeed? I never had to think about these things, because I didn’t have any problems with my milk supply, but I know that many mothers do. The more I thought about it, the more I was amazed at the generosity of the donating mother. It isn’t just milk she is donating, but also the times it took to pump it daily, the extra work her body had to do to produce it, and all while caring for her own child and household. I can’t help but think of what a truly selfless act that is. Instead of just waiting for her supply to level out (as mine did after a couple months), she decided to use what she had to help someone else.

The above thoughts were brought to mind when I read about actress Selma Hayek breastfeeding a stranger’s starving baby in Africa. She has never been one of my favorite actresses (although she was great in Frida), but I find myself now having a whole new respect for her.