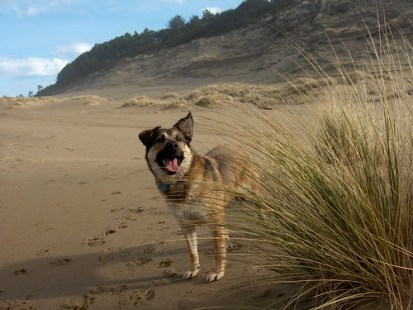 Barkley on the sand dune at Pacific City (photo by Marcy)

Barkley is our three and a half year old rescue dog that we’ve owned since the summer of ’05. We’re told he’s a shepherd mix, but he’s smaller than average at about 50 pounds. A lot of people comment on how cute his ears are because one is always perked up while the other one folds down.

David and I decided to take a visit to the Bonnie Hayes Small Animal Shelter a few months after we bought our house. We were looking for a cat. Instead we noticed a quiet, sweet dog that stood out among the other loudly barking, cage-rattling dogs (most of them strangely named after Star Wars characters).

David humored me while I asked to see Barkley in the “interaction” area. What do you think that dog did when he got there? He completely ignored us. He wasn’t interested in us or the toys, and would hardly be still for more than a second. Just paced around the pen as if he was looking for something (most likely his previous owner, or simply a way to escape imprisonment).

Anyways, we eventually left because this was all so sudden. Getting a dog is a big decision. I’ve never owned a dog before and besides, David did not want one. But I couldn’t help myself. A few days later I went back on my own to see if he was still there, and he was. He even recognized me. This time when I left he actually barked as I walked away, and I knew then that I couldn’t leave him.

Unfortunately, Barkley was scheduled to be “fixed” the next day, so they wouldn’t let me take him. They also wouldn’t let me place a “hold” on him if I couldn’t pick him up the day after the surgery. Worse, the very next day David and I were flying to Denver for his brother’s high school graduation. What a dilemma!

After I phoned David to tell him of my intention (can you imagine?!), I dialed a good friend of ours, Alex, who also has a dog, Mia (now Barkley’s best dog friend in the whole world). I asked if he would do me the biggest favor and pick up my (hopefully) new dog. Thank goodness he agreed. To this day Alex loves to speak in “dog voice” pretending that Barkley says “You saved me” to Alex. It’s pretty funny.

Overall, Barkley is the best dog we could have ever asked for. David was cool towards him at first, and complained often, but now everyone knows he loves that dog. Barkley was super quiet and reserved for a long time. He never barked and would flinch if someone moved too quickly around him, especially men. Women he liked, men not so much. Our guess is that he was mistreated by a male owner. He trained really easily, and except for his chewing/separation anxiety at the beginning, we haven’t had many problems. Now he’s a much more confident, friendly, and easygoing companion.

For anyone with the time and means to have a dog, I say go for it. Barkley has been such a blessing, I can’t imagine life without him. 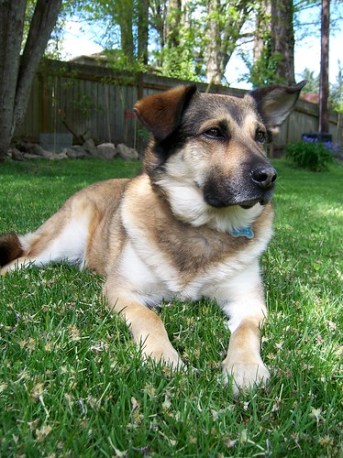 Barkley in his “noble” pose 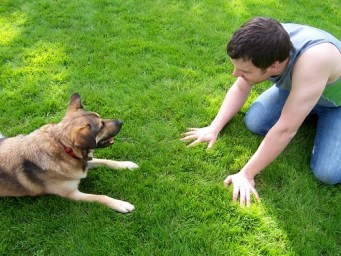 Playing in the yard with David 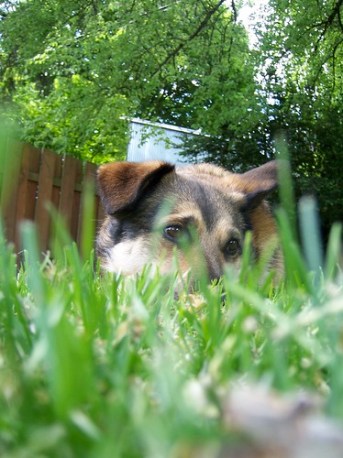 Hiding in the grass