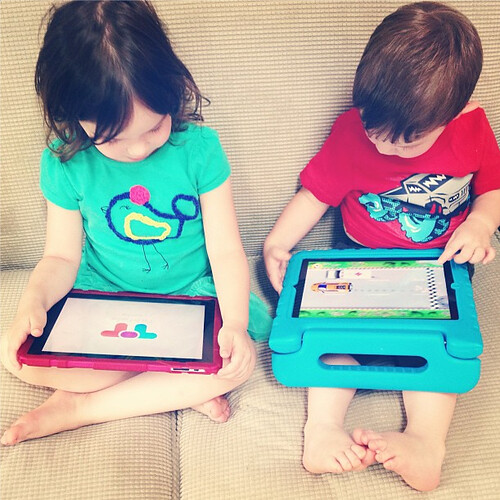 My kids have been blessed with grandparents who believe in the benefits of technology. Because of this, each of the kids has been an unlikely recipient of an ipad by the time they turned two. It is an amazing tool, even in the hands of a toddler and preschooler. We do limit the amount of time they spend using it, but its ability to entertain and educate has been a priceless. Like most parents, we try to choose apps wisely – mostly educational and skill-building apps, and also ones that engage their creativity (more on those later).

Being the sensitive (and expensive) handheld devices they are, an iPad can’t survive little hands without a case. Chloe’s case was chosen by Grandpa and still looks good after almost three years. It is a pink Hard Candy Street Skin Case. It fits very snug, but can be pulled off (by adults) to clean when needed. It also came with a solid screen cover, which is nice when its going into a carry-on and might rub against things. For Chloe it was perfect. She has had no problem carrying it around and her iPad has been safe ever since.

When Leo received his iPad, I had a hard time finding blog-style reviews on cases and mostly had to rely on amazon ratings. Eventually I chose a blue i-Blason ArmorBox Kido Series case. It’s been great! At the time, Chloe’s case was selling for $40 on Amazon. The i-Blason is $20. The soft handle makes it very easy to carry and use for little ones, and I often choose this iPad when watching movies at night because of the handy, built-in stand. Although it is more padded than Chloe’s, it still feels nice, and the iPad is quite protected. The only negative is the case density cuts down slightly on the sound quality, but it just means the sound has to go up a bit more. Overall, I’m really happy with this choice and would recommend it as an affordable choice that I would buy again.

Hope this helps others who are looking to buy a good iPad protection for their kids, and I’d love to hear what case you are using!