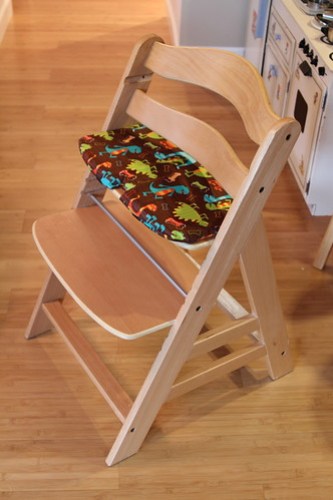 Ah, the plethora of kid stuff. I don’t know about you, but I thought we’d get by with a lot less gear than we actually have. I’d done my homework, read reviews and comparison shopped. I’d wanted to make the right choices the first time around. But the truth is, you don’t really know what will work until you try it in your own home with your own kid. Our first high chair, for example, had great reviews, two trays, folded for storage and could convert to a small chair for later. It sounded great in theory, but despite all those things we never liked it. The footprint was too wide, it was heavy, the trays were too big too clean in the sink, and we never folded and put it away between meals. What’s the point if it was going to be used 3+ times a day? We used it for both kids for the least amount of time possible.

As soon as Leo was old enough we switched him to a booster and tray set that sat on top of one of our dining chairs. It worked fine for a while, but I could see that Leo couldn’t rest his legs comfortably, plus it was too high to push under the table. We would all occasionally trip on the back legs. I began to look for other options.

Thanks to craigslist I found a like-new Hauck Alpha Chair

for a bargain. It was and is the perfect chair for Leo. I could go on and on about it, but I’ll limit myself to saying that it is super sturdy, adjustable, comfortable, promotes good posture and he can climb into it easily by himself. It also matches the rest of our dining chairs (unlike Chloe’s Ikea Urban Junior Chair). Winner!

We’ve had the Alpha chair since January and just recently took the seat and the foot plate down a notch to accommodate Leo’s growth (my little boy is growing up!). Actually, the only thing I didn’t love about the chair was the seat pad. It was thin and lumpy. If food spilled on it, it would immediately stain. More like a bib than a seat cover. Yuck. Here is the “Before” photo: 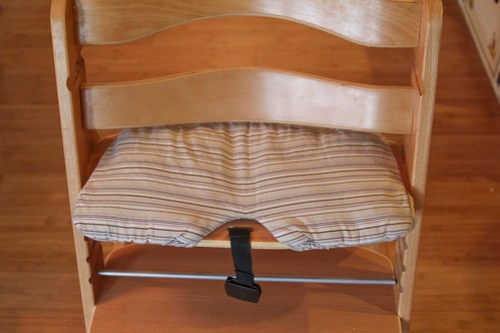 Time for a new seat cushion! Here is what I sewed up to take its place: 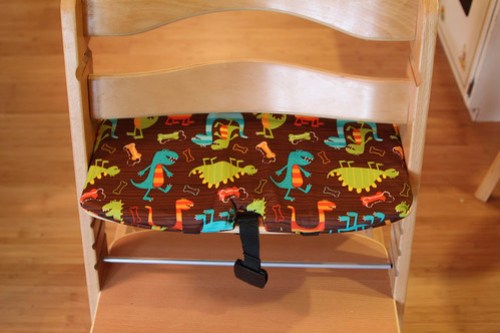 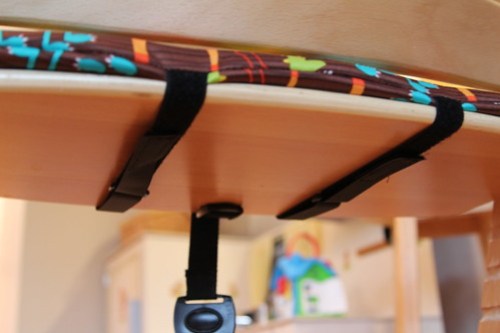 Much improved wouldn’t you say?

My cushion cover skills were limited to the one I made for our storage bench years ago. This time I had to buy the foam padding and add a strap down system, too. Luckily it was easy to find a sheet of foam at Mill End and it easily cut down to size (the sheet was so large, that I also ended up making a cushion for under Barkley’s dog bed). I used the same strap/velcro system as on the original pad (see above photo), but I chose PUL (or polyurethane laminated fabric) for the covering. It is water resistant and popular for cloth diaper covers. It is easily also easily wiped clean or washed, and came in prints suitable for a young boy. 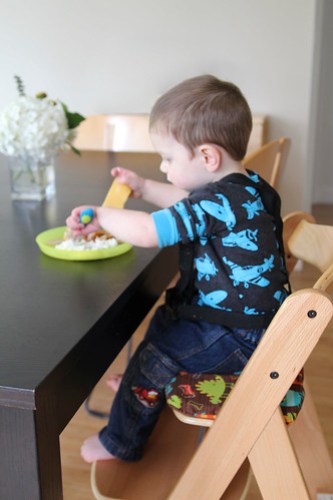 So far the seat cushion has held up nicely during the past couple months. Makes me glad I took the time to do it right. Do you have a chair that could benefit from a new seat or cushion cover?

One thought on “Before and After: High Chair Seat Cushion & Cover”