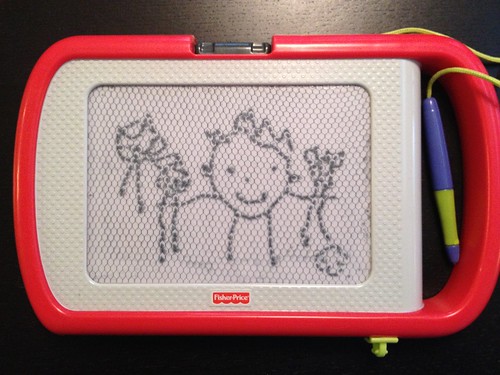 This is a drawing that Chloe made yesterday. I totally, totally love it. For the longest time she was mostly a scribbler. We never guided her drawing, but sometimes she would as us to draw something for her. Now suddenly she is starting to make all kinds of recognizable drawings. They are really fun to see, and sometimes come with imaginative scenarios or stories that blow me away.

The other photo shows her explaining the people in the picture: Daddy is in the middle. He is carrying her and Leo, one on each arm. He’s strong! Mama is in the back next to me, and Barkley (our dog) is the puffball in the corner under Leo. 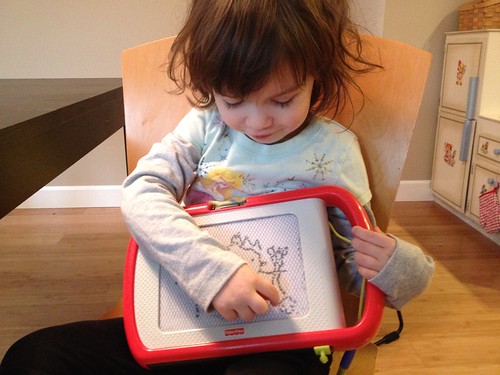 The toy is a Fisher Price Kid Tough Travel Doodle Pro with Light. It’s been a great! I bought it for Leo to play with during our holiday flights to Colorado and Cancun, and also because he was always fighting over Chloe’s Toulouse-LapTrec from B. Toys (both definitely on my list of best toy purchases ever). The Travel Doodle has a little stowaway light the kids like to switch off and on, and turns off by itself (genius! why doesn’t anyone make a kids flashlight that does this?). For Chloe I pack her travel Aquadoodle which is much thinner and lighter, but mostly now she just draws on her ipad. We also have the large floor Aquadoodle that both kids can play with at the same time. All have been a big hit, and worth every penny.

PS. I just found out when getting the link to the Toulouse-LapTrec that all versions before 2011 have been recalled, which includes Chloe’s. Looks like they might send a new one. Hers is the chocolate brown version, but now it looks like they only come in olive green and red.