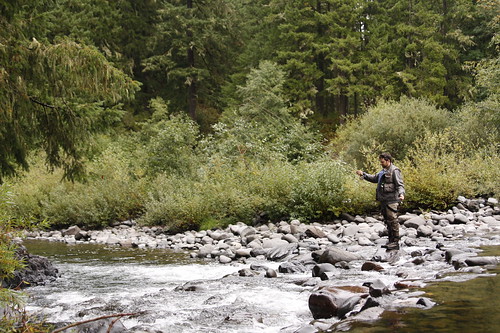 We haven’t gone fishing with David since way before Leo was born. It just got too difficult – being pregnant, dealing with Chloe on the long car rides (usually 2.5+ hours each way), keeping her from getting hurt, or falling in, dealing with the consequences of an absent nap, packing everything we might need and then un-packing/washing/putting it away… it just got to be too much. These aren’t friendly, easy to manage areas with picnic tables or park-like settings either. They are out-there, and miles and miles from “civilization,” not that I ever minded before. And now there are two little ones with very different needs to consider.

Anyway, we tried it on Sunday. Both kids were asleep in their car seats at the first spot, so I stayed in the car with them. It was a lovely, picturesque spot, too. I think I was the one who accidentally woke them up, trying to get my camera and things I’d want to have if we stayed there. David came back up the path right as we were all about to emerge and we decided to try another spot. The next one was bad. We should never have stopped there. It was down an extremely steep embankment and into a large but shallow section of running water with lots of rocks, but no place to actually stand, or sit without getting wet. Chloe fell several times and got her shoes and pants wet almost instantly. Did I mention the weather was cold and rainy? It turned particularly miserable while we were there. I was also worried. If something happened, I would only be able to take one kid up the steep embankment back to the car at a time, which means one would have to wait by himself/herself while I locked the other in the car, neither a good choice to be alone next to a rushing river. 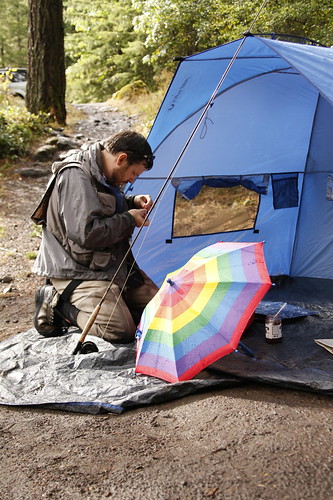 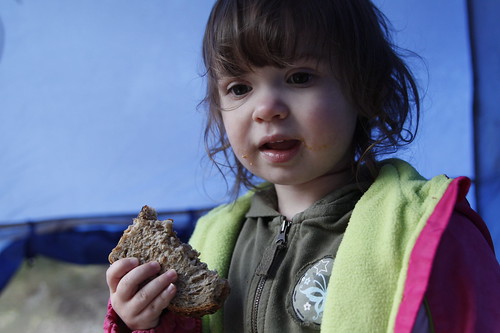 We finally moved to a third spot. By this time I knew what we needed to look for, and I got out first to give the place a looking over before agreeing. Still not ideal, but less water flow with a dirt/rock section to pitch our pop-up shelter. While here, I wrote down the two things I felt I needed for safety and sanity:

1. To be close enough to the car that I could take both kids back to it at the same time, by myself, if we needed something. That means leaving the keys with me, too. (I didn’t have them at the previous spot, and David was beyond yelling distance and couldn’t hear me, so we couldn’t have gone back to the car anyway).

2. A spot near the river that gently slopes into it so Chloe can splash (there would be no keeping her out of it), and possibly fall in (which she did, of course), but far enough from the fast water that I could fish her out with plenty of time to spare. Plus a place for me to sit and safetley put Leo down. 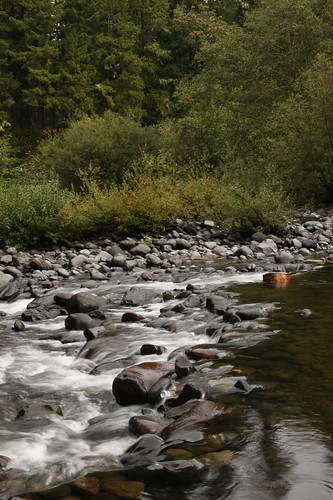 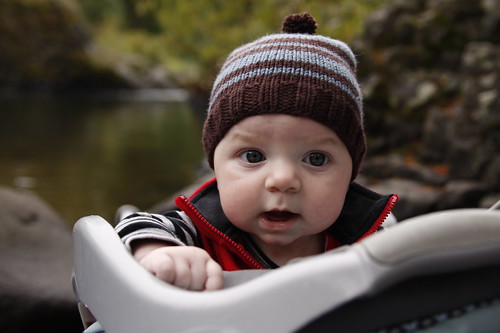 The other thing would be to have more time to pack. By the time I realized David was serious about going and taking us with him I was rushing around trying to get everything I thought we’d need. The two things I had forgotten were a good pair of trail shoes for me and Leo’s bouncy seat (it was too muddy to just put him down on a blanket). That meant leaving him in his car seat when I wasn’t holding him, and what baby wants to spend that much time in his car seat?

So anyway, the trip wasn’t the perfect family outting we had all hoped for, but it was a very good learning experience. I really miss photographing nature like I used to, but I realized it was not easy while being responsible for my children. All in its time, I guess. One day they’ll be big enough to know the dangers, and by then be joining their father fishing, like I’d be doing. Then maybe I can spend more time with my camera. I did get this photo though… priceless. 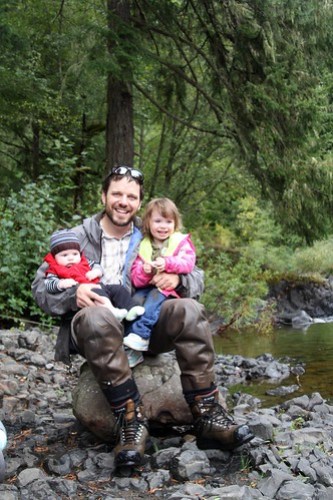