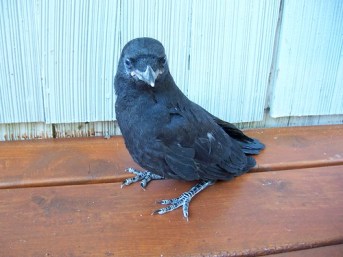 This afternoon we were alerted by an extraordinarily loud racket of CAAW! CAAW! CAAW! When I opened the front door to see what all the commotion was about I was amazed to find the largest population of crows I have ever seen. Something big was going down in the top of the large pine across the street. Mostly, there were birds sitting and flapping around up there, but some were circling directly over head while others dive bombed at something else in that same tree. After a while we started to hear a frightened and desperate PEEP! It was so high up that it was hard to see exactly what was going on. David thought he could see a hawk up in there, that likely got on the bad side of the neighborhood crows and so they called to all their buddies in the neighboring “hoods” to come and teach that hawk a lesson. It was a remarkable sight, and did I mention that how incredibly loud it all was? People were stepping out from all over to see just what the hell was going on. 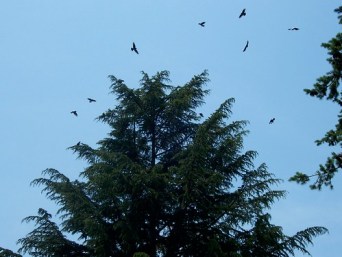 Eventually the crows must have completed their task because their numbers started petering out. Neighbors started returning to their respective houses after commenting on what a wild show it had been. And so we thought, well, that was that.

But not so fast. About an hour later, while we were outside enjoying the nice weather, David found a surprise hiding between the house and the bench on the deck. Turns out it was a young crow, sitting very still and obviously very scared. I know the scared part for a fact because when David approached it to get a better look, he literally scared the shit right out of it. This was made even more obvious because David had just re-stained the deck this week. Poor little bird. Sometimes I wonder if our property might be sitting on some sort of alternate plane, because this same thing happened last year. Not the diving/circling crow fest but finding a baby crow. I’m sad to say that last year’s crow didn’t last very long, and it was obviously very sick. I guess its just natural selection taking its course. But we’ve also found a huge dead crow in the past, along with dead squirrels two different times (although, I have a feeling those were Barkley incidents). We’ve only lived in this house 3 years. 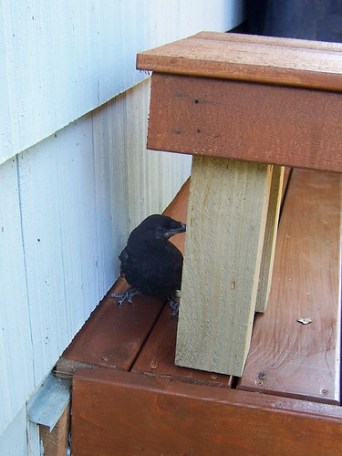 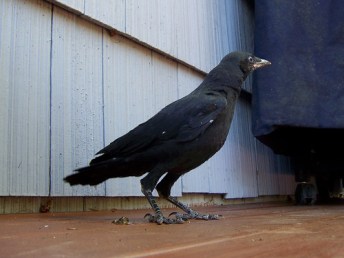 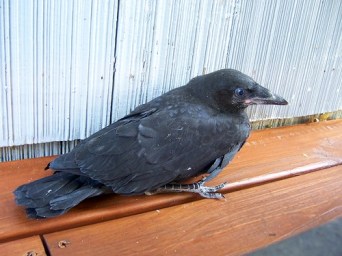 This time, we didn’t touch the crow. We just left it be, even though this neighborhood is overrun with cats. Crows are very smart, and this one was no exception. We figured we’d again just let nature take its course. For a while we kept Barkley inside, just in case, but then I let him out with me. He proceeded to completely ignore it. He has never been interested in birds, but I wanted to be sure. At least he would keep the cats out.

Eventually, the bird made its way to the front yard and we heard cawing from other crows trying to find it. I think they must have, because there was no trace of it later on. If I’ve learned anything, its that crows can pretty much take care of themselves, and each other, even if they have to call on their neighborhood posse to do it.