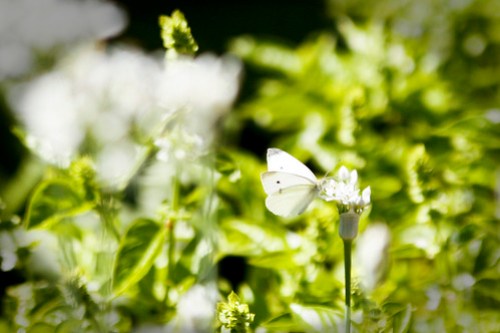 Chloe had an unusually accident prone day today. It started with a bloody split lip on a picnic bench at the park, with further little mishaps throughout the day, ending with a scraped cheek on one of the short bamboo poles that surround our smallest garden plot.

After the early split lip, I tried to be careful of the foods I offered her afterwards – banana, scrambled eggs, macaroni and cheese – but after lunch I forgot and gave her kiwi. I felt so bad after she cried out that in a mild panic I offered her vanilla ice cream, hoping to soothe the swelling and sting. David gave me a brief hard time for the kiwi, but then during dinner he gave her ketchup, which, from her reaction, must have been worse. Uh-huh. Despite the depth of our love for our daughter and our willingness to protect her, both of us accidentally caused her just a little more pain due to simple forgetfulness. I don’t know why, but it surprises me. We’re only human? We make mistakes? But they’re careless mistakes, despite our best intentions.

After our al fresco dinner, we stayed in the backyard for a while longer, soaking up the beautiful blue skies and temperate weather. David and Chloe were playing together, so I started clearing the table, but them came back out to sit and watch. It was weird though, because I kept feeling pulled to do something else – get on the computer, play with my iphone (did you know you can watch netflix movies now?), read through a catalog that came in the mail, anything but just sit there, enjoying a beautiful evening with my family. That didn’t seem right either. Summer will be over in less than a month, and I could barely seem to quiet my mind long enough to appreciate it. I shared these thoughts aloud to David, and he replied that I’ve always been like that. That my mind is always going, and I often seem to be somewhere else. He continued to tease me (I think) with some exaggerations, but there was some truth to what he was saying. Anyway, eventually we lay there on the grass in each others arms, with Chloe and Barkley playing close by, and I was able to focus in on the moment, for which I am grateful. It seems that it shouldn’t be so hard, to be in the present, but sometimes it is. I, in particular, have to work at it. Maybe that is why I enjoy reading so much, because I like to “get away” for a while. But it is nice, and important, to come back, too.

Oh, and two more things: 1) I finally got a decent shot of one of the elusive white butterflies (above) that I mentioned here.Â  2) The article on how Digital Devices Deprive Brain of Needed Downtime (NYTimes) is worth a read. Goodnight!

3 thoughts on “Despite the best intentions”