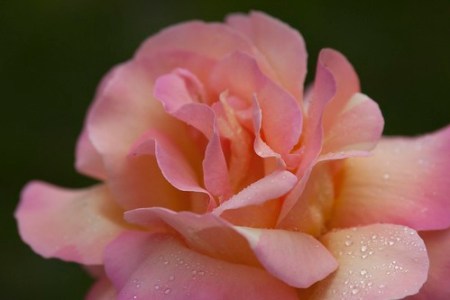 Chloe and I go outside almost every day, rain or shine. Most often we hang out in the back yard, but today we were out front so I could transplant some flowers. During this time a neighbor wandered over. He’s the kind of older neighbor that plays with the neighborhood cats,Â  invites the local kids to the museum where he works for free, and eptitomizes the words Neighborhood Watch.

Today he saw Chloe and Barkley hanging out in our driveway so he walked over for a brief chat. We talked about a plant he recently bought for the edge of his driveway. When he walked back, he called out and pointed to the plant he had just mentioned. I looked over and said something about it being similar to another plant he already had when I heard Chloe calling my name. That’s when I turned my head and saw her in the street.

Ever since Chloe took her first steps, I’ve taught her to never go past the curb. When we’d walk over to visit a neighbor, I’d pick her up and carry her. If we were going for a walk around the neighborhood, then she’d be pushed in the stroller. She’s never been allowed to take a single step onto the road. And today, she did it anyway. In that single moment that I looked the other way, Chloe took an opportunity to do something she knew she shouldn’t do. Whether she forgot, or did it intentionally, does not change the fact that it could have gotten her killed.

I immediately picked her up out of the road and placed her back on our yard, all the while very emphatically saying No! After I put her down, I thoughtÂ  a stronger consequence was in order, so I picked her up again and took her into the house. She cried when I shut the door behind us, because she didn’t want to come in, yet this still didn’t seem like enough. But by then I knew too much time had passed and anything else wouldn’t get tie together in her mind, so I left it at that.

All I can think now is thank goodness there was no car coming at that moment! Our street is pretty quiet and it is likely someone coming would have seen her and stopped anyway. But, what if? Also, this incident again revealed to me that I’m not prepared to discipline. I just don’t know how. Her doctor recommended Time-Outs (one minute for each year in age), but I know that she wouldn’t stay in a chair or a corner where I could safely leave her. Nor do I want to put her in a play-pen or shut her in her room. So what to do? She’s only 19-months right now anyway, but modern literature suggests that disciplining is best started early, that disciplinary consequence will be necessary to keep her safe and help her negotiate within society. The question is, what is the best way to go about it? I don’t know, but I hope I figure it out soon.

7 thoughts on “Looking back, maybe I should have spanked her”