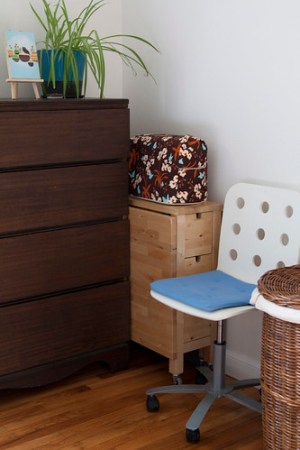 My sewing machine has a new dress! The ugly plastic one it came with finally got the heave-ho. Looks nice, doesn’t it? I got all ambitious and added a back pocket and a hole on top for the carrying handle, except I couldn’t figure out how to properly fold inside corners with bias-tape. It ended up oval, except I had already cut a rectangle in the fabric and the bias-tape didn’t “catch” the corners. I fixed that with a little fabric glue. Just don’t look too close. 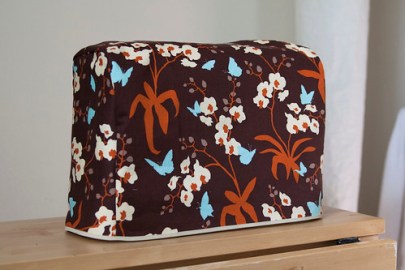 Before Chloe, the “spare” room (that is now her nursery) used to be where we kept the TV, the sewing table, and the futon. With Chloe’s arrival, we had no choice but to move the TV into the living room and the sewing table into our bedroom, wedged between the dresser and the hamper, because there was literally nowhere else in our little house to put it. Luckily, it folds down really small, as you can see. I also took a photo of the table fully opened.

I was this close to using Alexander Henry’s Mocca for the sewing machine cover, but after walking it and the Joel Dewberry Ginseng into the bedroom, I realized right away the Mocca wouldn’t jive with the serenity of the bedroom. Much the same way that I wouldn’t have been able to stand the TV in the bedroom. The walls are white, the curtains white, and my favorite duvet cover is white with only a few oversize, very abstract, pale blue, taupe and brick-colored butterflies. It was meant to be.

Good tutorials and inspiration for making sewing machine covers can be found at Chez Larsson, Spool, and Creative Reveries.