Has it really been a week since I posted last? Sorry about that. One good reason was because I lost my camera. I tend to be such a visual person myself, that I guess I feel that my words are just not enough. I could not find that camera anywhere. David and I looked and looked. A little over a week ago, I finally got fed up with my messy desk and dumped everything into bags (to be sorted later), so I thought for sure that’s where I’d find it. But no. We looked in my purse, in the car, in the office, under the sofa cushions, in all my bags, everywhere we could think of. See what great shots I’d be missing? 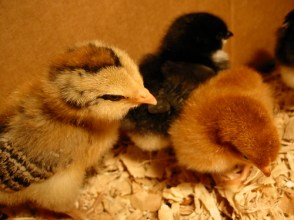 Downy and adorable, huddling for warmth 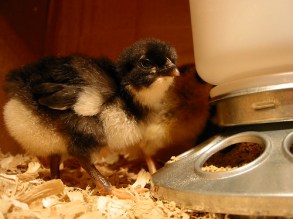 Caught in the act of eating 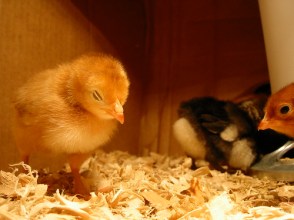 Nap time for this little chick

Luckily, we still have our old digital camera. I’m so used to my newer camera that I found it harder to use, heavy and bulky. But I was able to get these adorable pics of Marcy and Alex’s new flock of chicks. Aren’t they so sweet? I think they said there were two Americanas, two Rhode Island Reds and two Australorps. We’d have chickens in a heart beat if it weren’t for our home owner’s association. I was entranced just watching them eat, then sleep, then eat again. There little chirp! chirp! sounds were especially innocent and endearing. They’ll be producing almost an egg a day in about 5 months.

The same day we got to see their new chicks, the weather went a little crazy. First it was sunny, then it would snow, then it would be sunny again and then it hailed! Big, gravel-sized balls of hail pounding everywhere and accumulating rapidly. Here are a couple pictures of that. 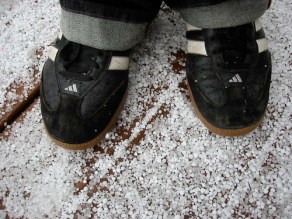 A shot with David’s shoes, for perspective 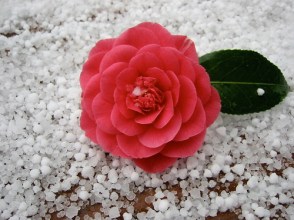 With a fresh-picked camellia blossom from M & A’s tree.

Lastly, I thought I should mention that David was the hero who finally found my camera. And guess where it was? In my purse. Where we BOTH had already looked, and which I carry around almost everywhere. Turns out it fell into the small zipper compartment that I hardly use. And David was all Are you sure it’s not in your purse? So he looked again and there it was. Safe and sound, right beneath my very nose the entire time.