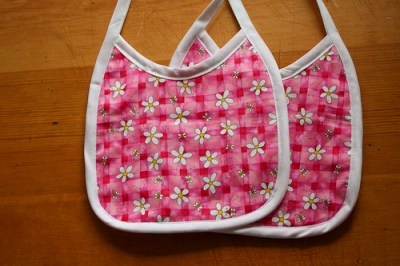 You can download this bib template or just freehand one

Another project that I tried while visiting Chloe’s Grandma Sandy was how to make a bias tape bib. Back when I was pregnant I had read that bibs with ties were a choking hazard, so when we were yard-saling we mostly picked up velcro versions. Turns out the ties are SO much better because you can get a custom fit around the neck, and baby can’t pull it off like she can with the velcro. Two of my favorite bibs were ones I won from Quilt Baby (now called The Modern Baby Co.), so Grandma Sandy showed me how to make something similar, while also giving me an introduction to bias tape. Here’s what I learned:

1. Cut out the desired shape from a piece of cover fabric (front) and a piece of terry cloth (back). This is an ideal project for scraps. The one in the photo is about 7.75 x 8 inches. You can download, print and trace this bib template, or just freehand one. 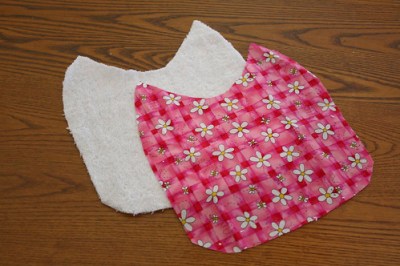 2. Pin the two pieces together, pretty sides out.

3. Starting from the top corner, sandwich the raw edges of the fabric between a first piece of bias-tape, from one side to the other, pinning as you go. Keep in mind that the longer side of the bias-tape goes on the back so that it will “catch” when you sew it down (see this great bias-tape tutorial and video). We’re using pre-made bias tape that is 1/2″ wide folded, but you can learn to make your own from this video . 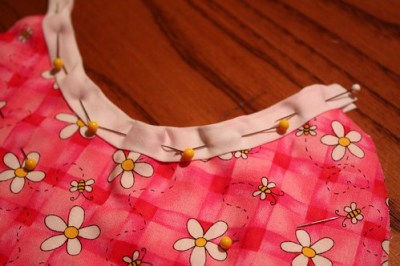 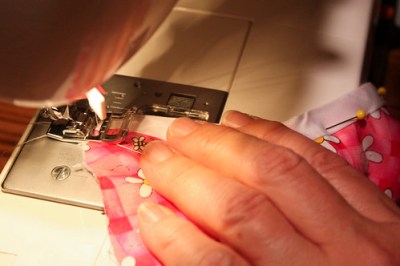 4. Cut the bias tape on both ends so that it is flush with the fabric, or just slightly longer. Sew this piece of tape down with a straight stitch, close to the edge of where the tape meets the fabric, but being careful not to fall off the edge of the tape. If it is important to you, match the top thread to the top fabric and the bottom thread to the terrycloth.

4. Next, sandwich and pin a second piece of bias-tape around the remaining outside perimeter, being sure to leave enough tape on both ends (about 11-12″) to form the strings for tying. Fold under the raw edge tips of the tape ties and tuck inside itself for a neat appearance.

5. Starting on one end of the tape, sew the tape together, all the way around until you get to the other side. Now just snip the threads and your done! 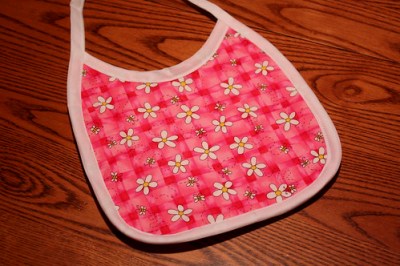